last year when Amazon released a mobile shopping app and then encouraged their customers to use retails stores as showrooms for purchases made on Amazon? It might be hard to imagine, but Amazon has achieved a new low.

Shelf Awareness has discovered that Amazon is now poaching customers from college bookstores. They reported in their newsletter today that Amazon recently set up a table outside a UW-S bookstore:

Yesterday during rush at the University of Washington, Seattle, Amazon.com showed some amazing nerve: in front of the University Bookstore’s store in the Husky Union Building (HUB), Amazon employees set up a display urging students to sign up for Amazon Student, a free program for six months offering two-day shipping and special deals (and then segues to Amazon Prime).

The Amazon reps approached students and asked them if they had purchased their textbooks already, and the reps also gave away several Kindle Fires in a raffle. 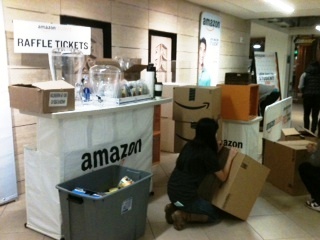 SA reported this story under the headline that Amazon was trying to steal customers from an indie bookstore, but that isn’t quite accurate. The University Book Store is technically an independent trust which operates college bookstores in 7 locations on UW campuses, but since it is so closely associated with the University of Washington (even the trustees are drawn from students and faculty) I am not sure that you can accurately describe this as an indie bookseller.

But even so, Amazon is being rather brazen here. They rented space from the university for the purpose of poaching customers from the university’s bookstore. (Don’t you wonder why the university let that happen?) Credit card companies operate on that level, though the deals they offer would better be described as predatory and not to the student’s benefit.

Amazon, on the other hand, is offering a very nice membership program. Even if students don’t take advantage of the free shipping, the free content alone makes Amazon Student and Amazon Prime a reasonable deal.

I think Amazon should do more deals like this; it is to the student’s benefit. And if the bookstore at the University of Washington really is dedicated to the benefit of students then they should welcome Amazon as well.

In fact, the bookstore might want to look into the pilot program that the UC-Davis Bookstore is testing at the moment. This college bookstore has a portal on the Amazon website where they earn a commission on Amazon sales. That program launched with the 2013 school year, and it is an ongoing test to see if bookstore benefits from the relationship as much as Amazon.

Amazon is evil. Don’t be duped.

No loss — college bookstores are the worst predatory ratbags (or the witting agents of the ratbag publishers), so I have no sympathy for them. Let them be pillaged!

They sent me an email on Monday to try their eTextbook rentals. Not a bad deal that you can pick your rental start/end dates (as opposed to blocks of preset times like some others). And they also offer a 7 day "trial".

Why can’t Amazon do this kind of thing, but for providing Internet service. Cable Cos could use some competition

The Cable cos own their hardware networks and don’t want to share. They’re not stupid; they know Amazon would undercut them.

Doesn’t really surprise me, I buy most of the books I read from Amazon. I wonder how independent or physical store only book shops will survive much longer. Shopping in the high street sucks, buying a book from the comfort of your own home with an almost infinite range of choice is the way to go.

[…] While this might appear optimistic, B&N College has reportedly added 50 stores in the past couple years. They have a strategy that is working, and a large number of college bookstores to try it on.  Around 1,500 colleges still operate their bookstore independently, including the University of Washington (the school where Amazon poached customers back in January). […]