When Amazon launched the new Kindle Fire HD last week Jeff Bezos made a big deal over Whispersync for Voice, a new Kindle feature which will let you sync your reading position in an ebook with a similar point in the audiobook version of the title.

I don’t listen to audiobooks (people talk to slow), but even I can tell that this is a cool feature which will prove useful to a lot of readers (the foreign language aspect could be especially helpful to students). And this is also a feature that Amazon is wasting no time in pitching the feature to audiobook buyers.

A reader was browsing the Audible website yesterday when Amazon made him an offer. Since he owned the Kindle edition of a particular audiobook, Amazon offered him the audiobook at a discount: 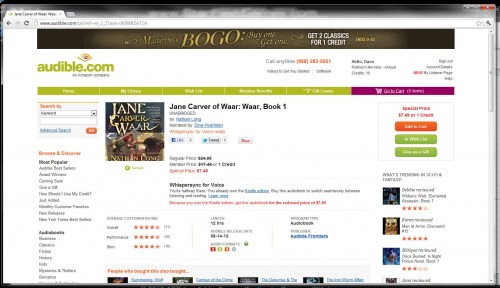 Amazon is nothing if not an enthusiastic salesman. In the center of the page is this offer:

So here we see the real nefarious reason for this feature; Amazon wants to sell you more content. Bwahaha.

Note, though, that this isn’t Amazon first attempt at cross-promotion. For several years now Amazon has offered a $100 credit on  certain mp3 players and other mobile devices when you sign up for an audible subscription. That offer isn’t available at the moment, but it did include the Kindle and the Kindle Fire.

Speaking of the credit, doesn’t it seem rather interesting that Amazon ended it right around the time that the new devices launched? Was that a coincidence, do you think?

Amazon bought Audible back in early 2008, 3 years after they bought Mobipocket and started building the Kindle platform. It wasn’t clear back then why Amazon bought the start up, other than to sell more content, but now I guess we know. Amazon saw a relationship between audiobooks and ebooks that everyone else had failed to exploit. of course, they had to build the platform first, but I suspect that this was the plan in 2008.

Don’t believe me? Look at how long ago Amazon bought IMDb (1998), another content source which Amazon exploited last week in  Whispersync for Video. Or look at Shelfari, which was bought  back in 2008, but was only integrated into the Kindle’s X-Ray feature last year. Okay, IMDB would require a level of foresight which I doubt anyone could possess, but my points about Audible and Shelfari remain.

If Amazon owns any other seemingly unrelated content companies now would be a good time to see how they might be integrated into the Kindle platform. I’d bet they will be.

Pocketbook’s 8″ Color eReader is Out of Stock

$7.49? The day Whispersync for Voice was announced, Audible offered me the audio version of one of my Kindle books for $3.95! (And I took them up on it – it’s a book I’m reading for a book club, and switching between audio and ebook will make it easier to finish on time.) The very first day, there was a glitch when switching from audio back to ebook, requiring me to reset the furthest page read, but since then, switching back and forth has been problem-free. I listen to the book using the Audible app on my iPhone, then read the book using my Kindle Touch.

Note that the cross-promotion discount can only run on the audible side for Agency-priced ebooks. A perfect example why agency is stupid; without it they get a chance to sell the same book *twice* to the same person.
For all the talk of bundling pbooks and ebooks, there is a bit more value to consumers in bundling text and audio than a digital edition with an object d’art. 🙂

I’m an audible member at 15 bucks a month. My year thankfully is almost up because the discounts Amazon is offering if I buy the Kindle book version is now cheaper then what I’m paying for my audible every month.

I did that 100 dollar on Kindle Fire last year Nate. I was joining Audible anyway so figured why not hehe..

OK, I don’t get the snark. Amazon is a for-profit company, just like millions of others, and they are in business to sell stuff. They also seem to do a pretty good job of offering stuff people want to buy. That makes a market (in the economic sense).

A market isn’t evil, all it takes is a willing seller, a willing buyer, and an agreed on price. Amazon provides all that. With these changes, it’s providing a sync between ebooks and audio books that has never been offered before, with a discount as well. Tell me the last time you bought a physical book and were offered the audio book for a reduced price. That’s right – never. Amazon bought the pieces/parts to make this happen, nothing nefarious there. Credits, sales, and cross-marketing are marketing tools that have proven successful for many companies, nothing new or scary there either.

There are a lot of people who like the ease of use and the affordable prices that Amazon offers. If you don’t like it, take your business elsewhere.

I hope you don’t mean I’m being snarky; it was not my intent.