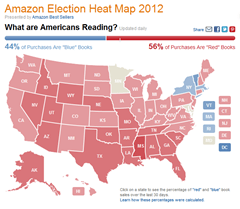 You can tell we’re getting close to the Presidential election by just how silly attempts to politicize things get. Case in point: Amazon’s new “heat map” of how well “red” and “blue” books are selling in different states. Amazon basically calls any given book “red” or “blue” based on marketing materials, reader votes, and so forth, and then tracks which books have been selling better in which states over the last 30 days. The result is a largely-pink map of the USA which seems to suggest that nearly everyone’s reading Republican, regardless of what the election is going to look like.

Now just watch all the pundits try to take this map and make something out of it. For example, Wired’s Roberto Baldwin has this to say:

Still, there’s no getting around the fact that even reliably blue states like California come out in shades of red in the Amazon map. According to publishing-industry analyst Michael Norris, of Simba Information, that might be due to the right’s ability to connect with its readers. “I can tell you that there are conservative imprints and conservative publishers that are just brilliant at figuring out what kind of books their audience wants to read,” Norris told Wired. “There just aren’t aggressively left-leaning imprints like that.”

Even that may be giving this map too much credence. There’s absolutely nothing scientific about it. Even leaving aside the fact that people may be reading the books not because they agree with them but to know what the “other side” is thinking, the sheer fact that a book is either completely red or completely blue assigns the same weight to a book by a serious political thinker as one by a loony conspiracy theorist.

In my non scientific study, there seems to be a lot of anti- Obama books out there right now and it also seems that there are more Right titles out there than Left titles. So their map should show Red.

Why in the world Democrats are Left and Republicans are Right? They both are rightist movements to me.
In my opinion there are no US left-wingers mass parties since the Thirties (well, this is a European point of view, you know).

Because Republicans are right so what’s left are Democrats.