Amazon rolled out an update for the second-gen Kindle Fire and both Kindle Fire HD Android tablets on Thursday. The update only adds a few small features but it’s going to make the tablets a lot more useful.

In addition to new support for Brazilian Portuguese in the menus, Amazon has also added new variations of the onscreen keyboard. The tablets now offer onscreen keyboards that have been customized for over 40 languages, including English, Chinese, Japanese, and many other globe around the globe. That’s going to make this tablet much more appealing and useful to owners around the world.

But that’s not all. This update also finally brings multi-colored highlights to Amazon’s tablets. This is a feature that Amazon added to the iPad and iPhone apps back in February of this year, and as you can see from the screenshot below you can now highlight text in 4 colors. 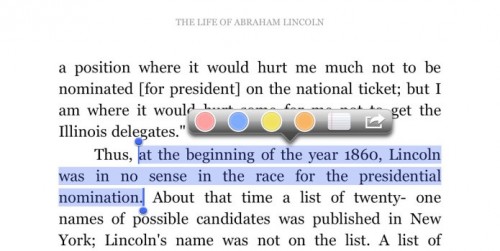 This update also brings more sharing options for Kindle Print Replica textbooks (Amazon’s PDF format).   You can now email your personal notes and highlights in a KPR ebook to other people. That’s going to make these tablets a lot more useful as textbook platforms, don’t you think?

Digital textbooks are still only a negligible share of the textbook market, with only 7% of students having bought one in the past year, but clearly Amazon is hoping that will change at some point. Many of the updates that Amazon has released for the Kindle apps and Kindle hardware are designed to better support digital textbooks, including improved KF8 and dictionary support on the iPad, vastly improved annotation features in the Android app, and even more updates for the iPad app.

The updates are going to be pushed out to all compatible devices over the next month or so, but if you cannot wait you can download the update manually and install it yourself.

Nice. Thanks for the info (and the links). I wouldn’t notice half the time about new updates if you didn’t have it on here.

I noticed mine updating yesterday. Of course, most of the tweaks are things I’m probably not going to use, but what the hey.

KF’s only had monochromatic highlighting before today? Jesus, my NOOK Color had that on day one almost three years ago.