Amazon Responds to the M-Edge Lawsuit 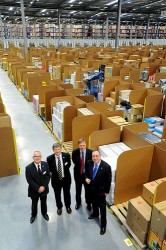 A couple days ago a case manufacturer filed suit against Amazon. M-Edge  accused Amazon of bullying, patent infringement, and other skullduggery. And today Amazon responded to that lawsuit.

Did you catch the news today about the Kindle sales over the holiday season? Go read the press release again; Amazon’s response is buried in the middle. It’s quite subtle, so I’m not sure anyone else noticed.

Amazon has not released an official statement, but I believe that parts of today’s press release is a response – in an off-hand sort of way – to that lawsuit. Look at the mentions of the third-party sellers, and all the times they are quoted. That is Amazon’s response.

One key detail in the M-Edge lawsuit is the claim that Amazon pressured M-Edge into agreeing to a new contract. M-Edge was acting as a third-party seller on Amazon.com, and the new contract gave M-Edge less money and Amazon a larger cut of the retail price.

See, Amazon couldn’t respond directly to the lawsuit, so instead they set about changing the mindset of the press and the public. Today’s press release is designed to counter the idea that Amazon cheated a third-party seller. That’s why Amazon mentions several other third-party sellers who had a good season.

TBH, I don’t know this for a fact, but I don’t see another reason to mention third-party sellers. I’m not sure Amazon has ever done that before, not in their major announcements.  I’m not going to get into a discussion on what this means; I’m not sure if it’s a confession, rebuttal, or merely damage control. I just wanted to express admiration for whoever thought this up.

But this clearly is a response, and the fact that Amazon took the time indicates that they are at least a little worried about the lawsuit.

Apple to Release the New iPhone on 9 September?

Sometimes a cigar is just a smoke. 😉

Amazon may not have done it before but emphasizing partner success while crowing is a common tactic of successful (non-Apple) platform owners. It serves the purpose of "selling" the platform to partners, and establishing that the platform’s success is benefiting others than just the "greedy" owner.

Microsoft, for one, *always* highlights third-party game success in their XBOX press releases and, not coincidentally, routinely gets the lion’s share of third party developer’s goodies (DLC, promo effort, etc) which feeds into greater XBX sales and greater third-party game success. They also routinely brag of how much total money is made off the platform compared to their two competitors, whose business model is more tightly bound to their first-party exclusives.

Amazon is still relatively new to the whole, high-visibility, platform-holder game but they do seem to be catching on to the rules a bit better than B&N and Kobo. Note how Amazon has taken to highlighting their million ebook sellers and their top-selling authors of the year (and even half-year). That’s not directed at consumers or competitors; it’s directed at authors and would-be Kindle after-market vendors for cases and skins and sundry. (plus stockholders, of course. 🙂 )

The key message is: "There’s money to be made off Kindle and its not all for Amazon."

I would agree with fjtorres comment: they want to sell to the sellers.

And of course, there’s another reason they might be doing this- Amazon.com traditional core business of direct, physical sales may be flatlining or even declining.

Prior to 2001, Amazon presented actual unit shipment figures in there post-holiday PR blitz. Every year since then, they have reported an ever-increasing number of unit shipments on the "peak day" of the holiday season. This figure is useless on it’s own, but at least it could be compared to the previous year to get a picture of growth.

This year, that specific figure was absent. Instead we are given a bunch of impressive-sounding but irrelevant statistics that we can’t compare to the previous year.

Of course, if this is the case then it shouldn’t be that surprising- every form of physical media is on decline due to digitization, the market for every other product shipped by Amazon is being undercut in price by their own 3P sellers, and this was the first year that Target.com was independent from Amazon.

Additionally- Amazon’s traditional growth driver, the growth of the internet itself, slowed. According to internet world stats, the number of internet users, worldwide, only grew 7% YOY in 2011. In North American specifically, the internet penetration rate has plateaued at just under 80%.
http://www.internetworldstats.com/emarketing.htm

So with increased competition, and the biggest growth driver absent, it would seem pretty unlikely that Amazon’s core business grew this year.

Yes, but how many sellers will read the press release? I would think that the largest group to see this text would be the press, which is why we’re the main target.

It is customary to e-mail your press release (or a link) to partners.
Plus, the press helps diseminate the "news": they have to be good for *something*.
Yes, press releases aren’t meant for the press. 😉

[…] charges Amazon with “unlawful corporate bullying” in a lawsuit filed this week. Nate Hoffelder sees a veiled response to the lawsuit in Amazon’s year-end press […]