The WSJ may have the inside scoop on that new Fire tablet that showed up on the FCC website a couple weeks ago. 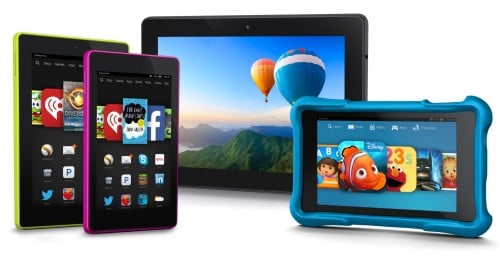 Greg Bensinger reports that Amazon is planning to launch an even cheaper 6″ Android tablet. The tablet will cost $50, half the price of the 6″ tablet it will (probably) replace. Amazon is also going to release a couple larger models as well:

The move would potentially attract buyers looking for a simple—and effectively disposable—device for straightforward tasks like streaming video at home and shopping on Amazon.com. But such inexpensive tablets typically come with compromises like inferior screen quality, durability or battery life in comparison to more expensive tablets like Amazon’s larger Fire tablets and industry-leading devices like Apple’s iPad. For instance, the $50 device will have a mono speaker, rather than stereo, one of the people said.

The $50 device is part of a slate Amazon is planning to release this year that will also include tablets with 8-inch and 10-inch screens, according to the people familiar.

I would bet that 6″ tablet will also lack decent cameras, and ship with only limited internal storage (see, that’s why the FCC paperwork mentioned the microSD card slot).

Amazon has had mixed success with their hardware efforts over the past few years. While the Kindle is still the best-selling ereader, that is the only bright spot. The Fire tablets have proven to only be popular with Amazon customers in markets where Amazon sells digital content, and as for the Fire Phone …

Amazon has lately culled its hardware efforts, halting or scaling back projects that would have developed a smart stylus, a projector, and a fourteen-inch tablet code named project Cairo.

Don’t be too pessimistic ,the hardware could be similar to the current 6 incher.
They should go with a lesser SoC, a 5$ quad A53 would be a bit slower than the current 2xA15+2xA7 but not by a lot. Going bellow that wouldn’t be worth it. RAM in the last year dropped some 40% in price so they can keep 1GB. NAND always getting cheaper and given the prices it’s not even worth going with just 8GB, you pay 5$ for a 16GB eMMC and that’s good enough (why pay 2.5$ for 4GB). Screen prices dropped a lot too so i would expect them to keep the res. For cams no idea if it matters much, does anyone need a back cam on this? Maybe some would like a front cam.
50$ might be a bit of a squeeze but hopefully they don’t cripple the experience to fit the budget.

"The Fire tablets have proven to only be popular with Amazon customers in markets where Amazon sells digital content. "

Uh, that was its one and only goal.

Except it’s not proving popular with all Amazon customers, just those who can make use of Amazon’s streaming services. I’ve been told by Canadians that it isn’t worth buying in that market, and that is true in other markets.

HTG, I think Amazon has reached the limits of the Fire tablet market. Now might be a good time for Amazon to release an unlocked tablet that comes with Google Play.

A Google Play tablet would be something a hardware-only player would do. But Amazon’s goal is to move content not hardware.
It really doesn’t matter how big their hardware sales are as long as they *know* how big their market is and don’t over-produce. (Like somebody we all know, who keep trying to sell tablets by the million.)

If it doesn’t lock you into the Amazon ecosystem, which it likely will, I’d be tempted to give it a shot. I’d mainly just use it as a doc reader and gamepad more than anything.

@Medium Punch, unless something changes Amazon doesn’t block the sideloading of apps. I’ve had no problems running sideloaded Vudu or Kobo apps on mine and Netflix, Hulu, Flixster, etc. are in the Amazon appstore and not blocked from the Fire.

Doing well with my Kindle Fire, esp doing anything Amazon, shopping, reading, reviewing books, etc. If the $50 tablet still does those well, it’ll suite a lot of people and be a bargain.

Screen quality will still be important though, I think.

Lot of parents and grandparents play a lot of games with their young ones, plus the illustrated books I’ve shown and read to my 2 1/2 year old grandson are big hits 🙂

Not to mention the YouTube children songs and videos.