Amazon Upsets the Budget Tablet Market with a $99, 6″ Android Tablet

Proving for one and all that there can be a fire without smoke, Amazon launched a new 6″ Kindle Fire HD tablet on Wednesday. The new tablet is both the cheapest and the smallest tablet ever made by Amazon, and I may or may not be getting one. 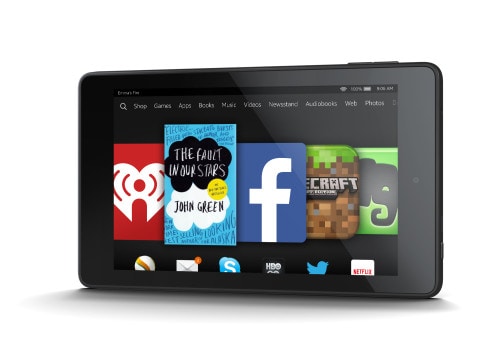 The Kindle Fire HD 6 is a cut down version of the new Kindle Fire HD 7, with all of the same software and much of the same hardware. It sports a 6″ IPS display with a screen resolution of 1280 x 800, and it runs Fire OS 4 Sangria.

Sangria is Amazon’s newest version of Android. Based on KitKat, it adds a number of under the hood improvements as well as profiles, enabling a household to share a tablet by giving each member access to their own individual email, Facebook, and Twitter accounts, as well as personalized settings options.

It will also have all the new reading features which Amazon announced for the Kindle platform yesterday, and the software features found on last year’s model.

The Kindle Fire HD 6 runs Sangria on a quad-core 1.2GHz CPU with 1GB RAM, 8GB or 16 GB internal storage. Like Amazon’s previous tablets, there’s no card slot, but this tablet does have a couple cameras: a VGA resolution webcam, and a 2MP rear-facing camera. That’s better than most $99 tablets on the market (and better than last year’s camera-less KFHD).

This tablet also sports a single rear-facing speaker (a major step down from the $139 2013 Kindle Fire HD), and while it doesn’t have an HDMI port it does have a microUSB port which Amazon says can take an HDMI or VGA adapter.

Retail will be $99 for the ad-subsidized model with 8GB internal storage.  It’s expected to ship on 2 October.

So will you be getting one?

I will probably need to get one so I can review it, but I’m not sure yet that I’ll get one for myself.

I don’t know of any budget Android tablet that has a single rear speaker with good sound, so that is one of the details I would want to learn about the Kindle Fire HD 6 before I committed to a purchase.

Sure, I like the cameras and expect them to be of good quality, but I see the Kindle Fire as a media tablet first.

Amazon has made it clear they see a market for kids tablets.
Well, $99-$119 is Nintendo territory.
Older kids that might not need the bumper or warranty of the official kids models should be happy with one. Say tweens and young teens. And It’ll be both reader, media player, and webpad.

It might also make a dent in the phablet market for adults.
That one inch will make a big difference, I think.

Yes, but Amazon also launched a $149 Kids tablet. It has some features to recommend it over this model, including a warranty.

Right. But not all kids are death to electronics.
Older kids in particular.
Not all parents need to pay the premium for a kid proof tablet.

Is it worth an extra 50 bucks? That’s half the cost of a new one of the 99 dollar models. I think there’s a greater than 50 percent chance my 5 year old would not break the 99 dollar model. If she does, theny I am out another 99 bucks (or 79 on a refurb at some point).

Unless I am missing something, I think it makes for sense to buy the base model and think of it as disposable.

I don’t see a limit on the warranty:
https://the-digital-reader.com/2014/09/18/amazon-just-conquered-kids-tablet-market-150-kindle-fire-hd-kids-edition-tablet/

I think the year’s subscription could make it worthwhile for some customers.

I missed the subscription. That does make it sound like a pretty good deal

What is Amazon’s obsession with 6 inches?

It produces devices roughly the size of a mmpb.
(You hadn’t noticed? Their 8.9 in tablets are the size of hardcovers.)
They are tricky that way.

Bluetooth speakers would probably be a good idea. Internal speaker is too small for decent volume/bass.

Yes, but tablets like this are personal devices. As i see it, they’re meant to be held in your hands. BT speakers don’t really fit with that idea.

Yes.
In my experience, even a middle cost bluetooh speaker is a lot of improvements on most (all ?) integrated speakers.
Headphones are better – if you’re alone, or if you want to move while watching.

I think this 6″ tablet will sell like hotcakes. $99 is a great entry price point. The screen is great for this price and you have the option to get 16GB and to get a different color.

You’re probably right. At first glance this looks a lot better than most of the $99 tablets on the market – the new ones, that is. I find the refurb Hisense Sero 7 Pro to be more appealing.

Don’t underestimate the benefits of the smaller size.
This thing could surprise and run away with the season.

I appreciate you have pointed out the sound quality. I guess, then, that going from an iPad 3 to this Kindle Fire HD 6 would be… noticed.

In any case, I have to put one thick piece of paper at the back of the tablet so that the sound waves can bounce to the front when I consume media.

The front speakers of HTC One should have changed the trend, but they didn’t, unfortunately.

The sound and price are the only redeeming features of the hd7. I can’t see having 99 dollar one which is only slightly cheaper and has crappy sound. Maybe for a little kid but I have the hd7 just as a media device so j can move around the room without headphones. As far as a web device, it’s just ok. I still reach for my iPad mini for serious web use. If apple had any decent speakers, I wouldn’t even bother with a fire.