Amazon announced a trio of new Android tablets this morning with great specs, decent prices, and a brand-new version of Android.

The 2013 KFHD and the new Kindle Fire HDX are running Amazon’s brand new Fire OS 3.0 (Mojito). This new version of Android has some serious improvements over what’s running on last year’s tablets, including:

Amazon is also promising in a separate press release that the tablets are enterprise-ready. Mojito features an integrated printer driver, office suite, a VPN client, and improved encryption and security in both the Silk browser and in the Wifi network drivers. Amazon is also promising that the new Kindle Fire HDX will feature secure hardware data encryption, adding yet another level of protection for your trade secrets and/or fruit Ninja scores.

And Amazon is also stepping up their game in the streaming media dept. Mojito is going to allow Amazon Prime members to download Instant Videos and store them offline for up to 30 days:

Once they start watching a particular title, they’ll have 48 hours to finish.

That’s a feature no other U.S. subscription-streaming service currently offers. And it might prove very handy for travelers, or anyone else who wants to watch something on a laptop or tablet but doesn’t have access to good broadband.

Amazon says it would like to make the feature available for all of its Prime Instant shows and movies. But, for now, it’s only going to be available on a subset of its titles, because the company has to haggle with rights owners to get the extra feature.

Amazon won’t spell out how many of its titles will be available for download, but says the feature will apply to “tens of thousands” of movies and shows. In June, the company said Prime Instant had more than 41,000 titles, which suggests that it may be available on at least half of Amazon’s catalog. 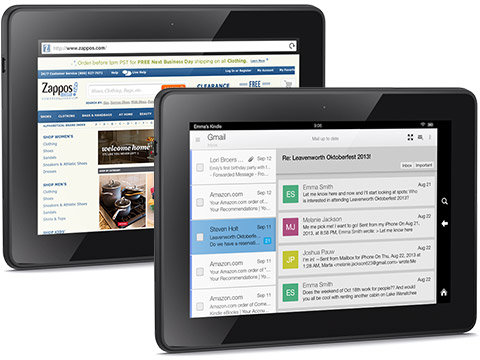 And that’s not all. According to the press release Mojito features a new suite of accessibility tools including Screen Reader, Explore by Touch and Screen Magnifier enable access to the vast majority of Fire OS features.

Some of these features won’t be coming until the Mojito 3.1 update in November, but I think they could be worth the wait.

Tell me, did you catch the bullet point about making the carousel view optional? If that doesn’t interest you, check out the point about productivity apps. That is arguably a sign that Amazon now views their tablets as more than just media consumption devices.

My biggest gripe about my current KFHD is that it is terrible for any use other than as a media tablet.  it frankly isn’t very good at basic activities like email and rss feeds, so I often had to carry around a second Android device just to get work done while on the go.

Based on the changes Amazon made to the new Mojito OS I would say that I am probably not the only one to feel that way.

Tesco Hudl Android Tablet to Ship Next Week, Will Cost £119

Android 4.2 = no TRIM support = slow as molasses within two years.

Amazon seems to be setting a pattern of ignoring last year’s tablets as soon as the new ones come out (while also dropping the price). I don’t think they or anyone else will care about how outdated these tablets might appear to be in 2 years.

No one will care except for the people who have to wipe and reset every few months because their sequential read/write speeds are a quarter of what the device shipped with.

Choosing between 4.1 and 4.2 was a tossup – but the baked in TRIM support in 4.3 makes it an absolute necessity.

Nate is correct, the older tablets will be passed down to the youngsters and new devices will be purchased. Whatever mistakes have been made will not matter in a few years, and the newer devices will be that much more compelling. Upgrade or GTFO.

[…] screen with an impressive 1920 x 1200 resolution display. It’s running Amazon’s own Mojito OS on a 2.2GHz quad-core Qualcomm processor with 2GB of RAM, Wifi, Bluetooth, and a camera (more […]

[…] Amazon is also boasting that Fire OS 3.1 has a new ability to connect to secure enterprise wifi networks and access corporate apps, documents and resources like SharePoint, and VPNs. Hopefully this means the Kindle Fire HDX might start living up to the productivity claims made in the original press release for Fire OS. […]