One might think that the two tablets Amazon launched back in May were all they planned to release this year, but you would be wrong.

A new Amazon tablet cleared the FCC today. As pr Amazon SOP, we cannot tie the filing to Amazon, but the paperwork has all the hallmarks of an Amazon device.

What we do know is that this tablet has Wifi, Bluetooth, and a microSD card slot. It likely also has a speaker, although that is not mentioned anywhere in the test results.

Since Amazon did release 7″ and 8″ Fire tablets earlier this year, it is reasonable to conclude that this is a replacement for the 10″ Fire tablet.

That tablet was last refreshed in June of last year. It got a new shell and a new storage option (64GB) but little else was changed.

That tablet is overdue for an update, but I don’t expect any significant improvements. As we saw earlier this year, Amazon is more focused on selling cheap tablets than in upgrading every year.

In terms of specs, Amazon’s best tablets were released 4 years ago (in fact, the HDX line is still better than any current model). So if you are wondering what the new Fire tablet is like, just picture the current model, with sparkles. 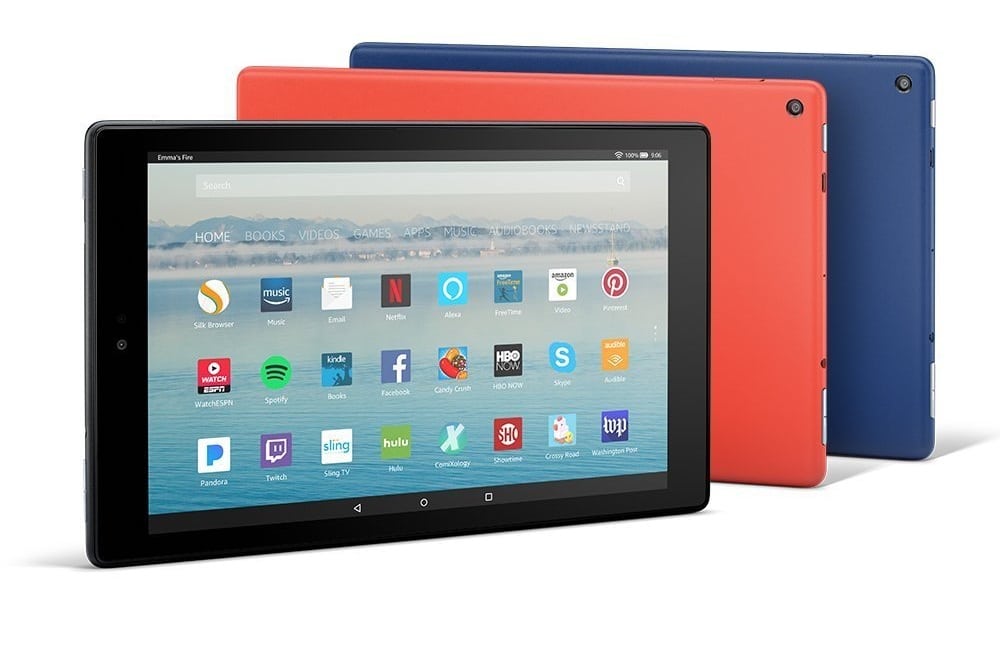 The only thing the new models have over the old one is SD card slot and Alexa. Alexa only matters if you want her to TTS books for you. I find her voice to be much better however, I wish they would just bake her voice into the voice choice options. TTS with Alexa can be flakey sometimes, but overall, it works pretty well.

If the table at https://en.wikpedia.org/wiki/Fire_HD is accurate, the HD 10 has the same CPU as the HD 6 I have had. It’s a 32-bit processor, and has 1GiB RAM. The newer tablets have a 64-bit CPU with 1.5GiB RAM, and the GPU is also different and clocked faster. The difference in performance is quite dramatic: my HD6 is almost unusable because it is so sluggish, and it has poor battery performance. The HD8 I bought a couple of months ago runs circles around it. So I think your theory that this is an updated HD10 is likely to be true and also a significant update.

While I never had an HDX, I more or less subscribed to the idea that they were somehow 'better' for the longest time. But my HD8 cost all of $50 and It performs quite well as a media consumption tablet. The lower screen resolution doesn’t bother me at all, it has expandable storage (unlike HDX), and there are few apps in the Amazon Appstore which would require a more powerful device. So I get why Amazon stopped making the HDX line.

"So I get why Amazon stopped making the HDX line."

They didn’t stop because you personally didn’t care for high resolution. Amazon stopped because they saw the writing on the wall. Tablets were a fad and never going to replace the usability of a laptop nor did they have the ultra-portability of a smart phone. The market for actually good tablets radically shrank. The only thing left is to market garbage tablets to people who want some kind of mobile computing but have no budget for it.