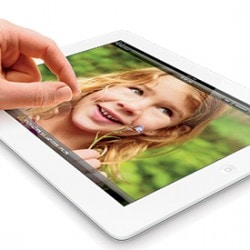 There’s this thing about HD videos. By the time the resolution gets high enough to math the Retina Display in the latest model iPads the files have tended to get rather large. That’s why I am a little surprised that it took Apple this long to release an iPad with 128GB of storage.

They’ve just announced a new iPad model with double the storage of the previous models. Retail is going to be a whopping $799.

Yikes. Just to put this into perspective, my Lenovo u410 cost $80 more and it shipped with a keyboard, 32GB Flash storage, and a 750GB hard disk. Given the ever increasing file sizes I think we’re past the point where that much Flash storage makes sense in a single device. Bring back the mobile hard disks, I say.

I’m kidding. The larger SSD might still be extremely expensive, with 1TD drives costs $2,00 or more, but there are signs that the prices are dropping faster than screen resolution is increasing. Micron unveiled a 1TB SSD at CES 2013. They expect to sell it for around $600, and that means that by the time the iPad had a similar amount of storage the prices will likely drop by half or more.

Why Exactly Did B&N Launch Nook Video Apps for iPad, Android, and iPhone?