might be reporting that Apple’s tablets are losing their edge in the US tablet market but it certainly looks like Apple still sold quite a few tablets this past quarter. IDC released a new guesstimate today for global tablet sales in the last quarter of 2013, and Apple is still in the lead.

With 26 million iPads sold around the world in Q4, Apple is still the leading tablet maker tracked by IDC. Coming in a distant second was Samsung with an estimated 14.5 million tablets (nearly double the 7.8 million sold in Q4 2012). Amazon, Asus, and Lenovo fill out the top 5 with 5.8 million, 3.4 million, and 3.1 million tablets sold. The rest of the market collectively sold 23.3 million, bringing the total to 76.9 million tablets sold worldwide in Q4 2013 (up from 60 million).

If these figures are accurate then I can see at least 2 major surprises. Amazon didn’t do nearly as well as I would have expected. They actually sold fewer tablets than in Q4 2012, meaning that their market share shrank.

Samsung’s market share grew, but that comes as no surprise; throw enough different models on the market and you’re bound to sell a few units. No, the other surprise is Lenovo. They went from not even being ranked to knocking B&N out of the top 5. That’s not bad.

But it is also a data point that should be taken with a large grain of salt.  While writing this post I double checked estimates for previous quarters and I see that IDC believes that Amazon didn’t rank in the top 5 tablet makers in Q2 or Q3, and they just barely made it in in Q1. I’m not sure I believe their estimates, but TBF I don’t have better data. 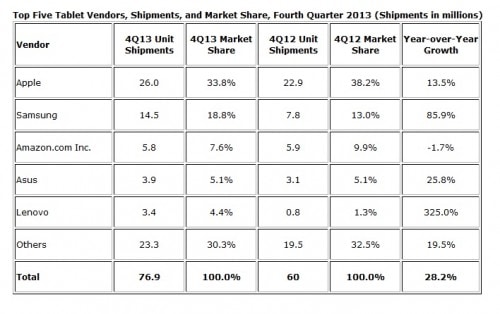 In other news, Apple reported in their investor conference call earlier this week that they had sold 7 million iPads to schools and universities in the US. If you subtract the 4 and a half million iPads reported sold around this time last year, we get a new estimate of Apple’s penetration into the education market.

Around 2.5 million iPads were sold to schools across the US these past 11 months, giving Apple the single largest share of the educational tablet and laptop market. Coming in a distant second are devices running Windows, with Chrome taking a surprise third place (or so says the WSJ).

I’d be interested to know what the "other" tablets are especially with 23 million units sold.

Higher granularity would be nice, yes. But that data can only be bought.

I fail to understand why educational organizations buy into the proprietary and closed ipad. Maybe they don’t understand Android.

Eh, even the "open" Android alternatives to the iPad are being pitched bundled with content from Pearson (or some other textbook publisher). In reality it’s really not much more open than the iPad.

[…] they reported in past years. I would go along with the theory that hardware sales have flattened (IDC estimates back this up), but I am not so sure I would make the same claim about ebook […]

[…] market, and currently claims to have a 94% market share. That equals 2 and a half million tablets sold over the past year,  and if it’s true then at best all of Apple’s competitors combined have sold […]

I am interested in the distribution of the 2.5 million ipads that went towards education in the past 11 months as well as your reply to FBone about how information can only be bought.

Regarding the 2.5, where is this taking place? The data presented is on a global scale and I would love to see more of a breakdown of the distribution. Hopefully, this is not the information you were speaking of when you replied to FBone above.

You have a new subscriber in me. Thanks for anything you can share as I hope to put it to good use.