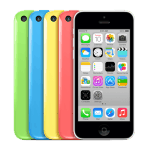 never released the cheaper plastic iPhone that many expected to see last year, but the iPhone 5c has gotten a little cheaper.

Last month Apple released an iPhone 5c model with half the storage in five markets (UK, France, Germany, Australia, and China), and earlier this week they made it available in an additional fourteen countries around the world.

Apple customers Austria, Belgium, the Czech Republic, Denmark, Finland, Ireland, Italy, Norway, the Netherlands, Poland, Portugal, Spain, Sweden, Switzerland can now buy the iPhone 5C with 8GB of storage. The retail price in most European countries is 549 euros, or about 50 euros cheaper than the model with 16GB of storage (the 16GB model is reportedly 100 euros more expensive in Italy). The phone will also be available from authorized resellers in those countries, and it will of course be subsidized by some telecoms.

The iPhone 5C, or the plastic iPhone, was expected by many pundits to be a budget model which would target a much lower price range than Apple’s usual premium hardware. Most of those pundits were surprised when it debuted with a premium price tag, but not this blogger.

As I said when I covered that first rumor in March 2013, I did not see a reason for Apple to sway from their policy of charging premium prices for premium hardware and reaping premium profits. Apple might not be making the majority of the smartphones but Apple (and Samsung) are making most of the profit. So long as that is true I don’t see why Apple is going to drop their prices.

Crimescape is a new imprint exclusively for Kindle Singles