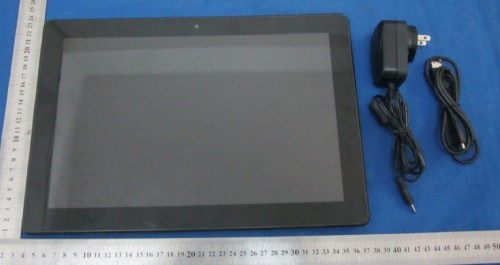 Do you know what you get when you cross an Android tablet with the family car? I don’t, but apparently Archos does. Their newest tablet showed up on the FCC website today.

It’s called the FamilyPad, and I don’t know much about it. It looks to be running the latest version of Android on an Allwinner A10 CPU, and it has 2 cameras, Wifi, HDMI out, a couple of USB host ports, g-sensor, microSD card slot, and a speaker/mike as well as 3 big batteries. It’s going to come with 2 storage options, 8GB and 16GB.

Kidding aside, there seems to be a growing trend in android tablets for growing tablets. The FamilyPad is third large Android tablet I’ve heard about in the past couple months. The first came from Viewsonic and measured 22″ across, then Toshiba showed off a 13″ Excite, and now Archos has this tablet.

I’m planning to get one of these tablets because I’m deeply interested in seeing how well Android works on it.  Android was originally designed for 3″ screens, and with each new iteration of Android tablets it’s been interesting to watch device makers and app developers adapt to new screen geometries.

These tablets are so big that I’m not sure Android can adapt.

If the price isn’t outrageous and the resolution is good enough, it might make a good comic book viewer.

It seems to be almost big enough to display an entire A4 or "Letter" page in 1:1 scale. A4 page has 14.3 inches diagonal.
Might be an interesting option for reading pdf documents, such as scientific papers or comics.

Agree, could be very useful for reading A4 files without having to reduce the size too much.

[…] every purpose and in every imaginable size. Archos has offered screens ranging from 2.8″ to a 13.3″ FamilyPad. In the past they have launched a gaming tablet, an mp3 player, and a glorified alarm clock, and […]