Augen Genbook 108: the little Android netbook that (almost) could 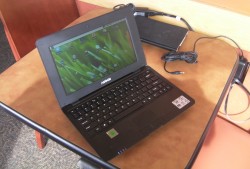 The cause of death was that it ran poor software on adequate hardware.  (I still think it’s worth hacking!) But mine only cost $100, so perhaps I shouldn’t complain too much.

I bought it because I wanted an Android netbook. I wanted to see first hand the problems Android has when you try to port it to a device based on a keyboard and trackpad. I could have guessed about most of the problems, but a few surprised me.

The Genbook 108 definitely lives up to the netbook label. It weighs less than 2 pounds and is relatively thin and light when compared to any of my other laptops.

It has a fairly good quality 10″ (1024×600) screen, but the drivers aren’t properly calibrated. I know there’s a problem with the screen drivers because a number of apps (including the browser) hang off the right side of the screen. BTW, given that this is Android it really should have had a touchscreen; that would have fixed a number of the usability issues.

Other than the one minor problem with the screen, the specs are adequate. It’s running v2.1 on an 800MHz CPU (Telechips TCC8902), which is more than enough if you think of this as a netbook. But as an Android device it’s like most budget tablets – underpowered (but still adequate). Mine also had 8GB Flash, a SD card slot, 3 USB ports, speakers, headphone & microphone jacks, ethernet, and (iffy) Wifi.

The keyboard and trackpad are quite usable, and really the only problem with it is that it needs better drivers to make it act more like a netbook. For example, it lacks the keyboard shortcuts you might expect. Even Y/N don’t work for yes and no. Tab doesn’t work to jump you from one field to the next in a form (and other things like that).

But I do like that they did some customization. The row of function keys are tied to specific apps/menus (settings menu, Wifi menu, video player, etc). And Ctrl-Alt-Del shuts it down.

BTW, I initially had trouble with the Wifi but as it turns out the Genbook didn’t like my home network. It’s not the first device to object, but that does render the Wifi support iffy.

The Genbook 108 shipped with a decent suite of apps including ES File Explorer, IReader, RepliGo (a PDF app), Docs2Go, Skype, and others. Once I got the Amazon Appstore installed, I had no trouble downloading and installing apps. I had trouble installing the Kindle app at first, but after I downloaded the update from Amazon the problem fixed itself.

The short of it is that this netbook comes with most (all?) of what you’ll need to use it as a netbook. And they mostly work well with the trackpad.

This was a surprise. The video performance was very good for the specs. Sound was decent (tiny speakers), but the video – it upgraded a 650×350 video to full screen and kept it sharp with no fuzzy spots or faded colors. It wasn’t until I found the CPU specs that I realized how good it is.

It’s specced at 2.5 hours, and I got well over 2.5 hours of video+Wifi.Turn off the Wifi and it should exceed 3 and a half hours.

Unfortunately, it doesn’t have a sleep mode.  If you press the power button briefly you will turn off the screen, but the Genbook won’t actually be asleep. Boot time was nearly a minute, so the missing sleep mode is a serious shortcoming.

The Kindle app is a little slow. It’s adequate, but I don’t really like it on a 10″ screen.  RepliGo (PDF), on the other hand, worked well. It was reasonably easy to use with the keyboard  and trackpad.

I’m still not sure I’d recommend this for average user, but it is simply crying out to be hacked. It has decent hardware and an okay suite of apps; what it lacks is tweaking so it behaves more like a netbook and less like a phone. It is a cute little netbook. If you go into it expecting to get a netbook that costs only $100, you won’t be disappointed.

Gizmodo is Wrong – This is NOT Why People Still Pirate

It seems unlikely to me that this device will attract hackers. It doesn’t seem to be widespread and it doesn’t have any novelty about it… still, maybe some of the hacks for other TCC8902 devices will fit it.
In other news, you had a post "Augen to release 2 new e-readers in April" https://the-digital-reader.com/2011/01/08/augen-to-release-2-new-e-readers-in-april/
Did anything come of them? Augenus.com doesn’t have any details. Augen seems to be producing nothing but vapour at the moment!

They haven’t said anything.

The gen book will not allow my mifi device to connect to wifi,also will not except the factory set pass word. I can’t figure it out is there a way? I need some help.

All I can recommend is that you look for the tech support pages for whoever sold you the Mifi. They’ll probably have a troubleshooting guide.

If you work your way through the guide and it doesn’t solve your problem then you might be seeing the Wifi driver problem I had with the Genbook. It just won’t work with some Wifi networks.

[…] netbook late last year. I have one and it has pretty decent specs and performance for the price. This is a nice little sub$100 netbook. If you’ve ever wanted to experiment with an Android netbook, this would be a small […]

can someone please help me. My genbook is acting weird. It cuts on but stays on the blue screen

There is no help for the Genbook.Big hype no action a real piece of crap.The company I bought it from even"temperarly"terminated thier 1-888#to better serve thier customers(yeah that sure helps us)Don’t recommend it to anyone……..

[…] a stock Android firmware installed before being sold to the unsuspecting public.  I’ve seen an Android netbook that fit that description and that’s what I expected with the eGlide. I am at least slightly […]

I’ve had this for a wile now it has ben siting sor abot a year or so imjust now starting to use it agen I’m having problems with the app market is there a website I can go to get get updates for the software version and things like that?

Hey Steve, Did you ever get it to move off the bot. Mine just started today not finishing loading. Ggrrrrrr… Mine has been sitting on the darn android bot all day. I feel like throwing it out the window!!!! If anyone can help me please email me at [email protected] Thanks!!!!

I can’t get my netbook to have sound / audio at all. Is there an app i have to download? Someone PLEASE HELP?

When I turn it on it does nothing but stays on the home screen, I don’t even see the cursor. What is wrong with it?

Hi my name is Harsimran Singh. I have Augen netbook Windows CE OS Black Netbook.
Whenever i start my netbook it stops after loading And I have to reset and start it again and it stops again. Can somebody help me?

I spent a few minutes trying to find a guide to fixing this problem. I could not find one. sorry.

What happens when you press, for example, you press the app drawer button or an icon?

Could the touchscreen be brokwn?