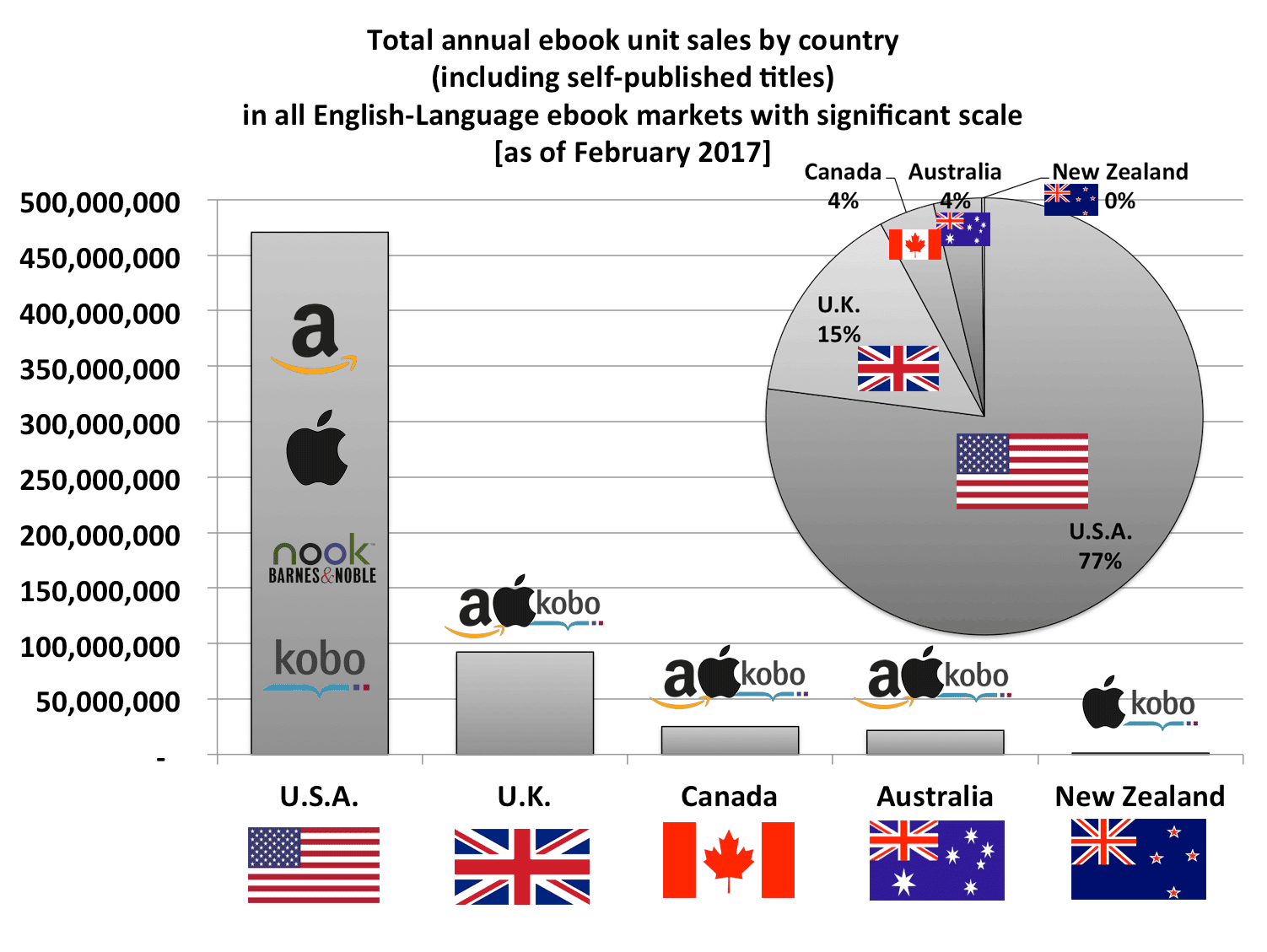 A couple months back I predicted that Kobo would one day acquire Nook, and new market estimates released this week suggest that it might not be a bad idea at all.

A new Author Earnings Report was published earlier this week, and it showed that the Nook Store was still one of the larger ebook retailers.

The report focused on the five largest English-language ebook markets (US, UK, Canada, Australia, and New Zealand) and studied the relative market shares of the fifteen largest bookstores in those markets.

Much to no one’s surprise, the report shows that the US market accounts for over three-quarters of the combined market, and that Amazon dominates all of the markets where it has a local Kindle Store: 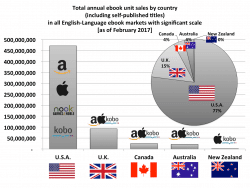 eBooks mae up a significant part of the US, UK, and Canadian book markets, but less so in NZ and Australia:

Of course, it is hard to tell just how many ebooks Amazon sells in NZ and Australia; as someone pointed out over at The Passive Voice: "The results for Australia are a tiny bit skewed because a lot of us were Amazon.com customers before the Australia-specific store opened, and didn’t make the switch to Amazon.com.au."

And there is no local Kindle Store in New Zealand, so there’s no way to accurately estimate the size of that market using only external data. New Zealanders buy ebooks from the main Kindle Store, which means that their purchases are counted in the above chart as part of the US market.

Coincidentally, the same is true for every country which lacks a country-specific Kindle Store.

In other words, the charts which show Kindle ebook sales in the US actually show a semi-global market which includes, to name a couple examples, all of Africa and much of South America. So the "US" Kindle Store really isn’t just the US – but I digress.

The real point I wanted to get at was the estimated number of ebook sales for the Nook Store (in units, not dollars):

B&N’s Nook isn’t half the store it used to be, and yet it is still selling more ebooks than Kobo.

I’d say that makes it a good target for Kobo to buy – if the price is right.

You can find this data, and more, on the Author Earnings website.

Did [email protected] ever spin off Nook as its own business entity?

No, Nook is still part of B&N.

It’s complicated. Nook Media is now a subsidiary of Barnes & Noble. They spun it off in 2012, and have since had investments from Microsoft and Pearson, as well as a partnership with Samsung to produce hardware, but it’s still part of Barnes & Noble. In 2014 they announced they wanted to Nook Media to become a completely separate independent entity (I believe with their college bookstores), but gave that idea up by the end of 2014.

This is why it’s hard to make a compelling case that B&N has any idea what to do with nook, much less a strategy.

They’re still selling more books than Kobo who are considered to be in the game.

"In other words, the charts which show Kindle ebook sales in the US actually show a semi-global market which includes, to name a couple examples, all of Africa and much of South America. So the "US" Kindle Store really isn’t just the US."

In fact much of Africa (and Asia) is simply blocked from even seeing the Kindle store, let alone buying from it. Here in The Gambia if I log out of my pre-existing Amazon account and visit the Amazon store as a local resident there is no Kindle store.

And of course Amazon imposes whispernet surcharges on countries like South Africa where readers can access the Kindle store.

This is reflected in the poor show of sales by language in the AmCom chart Data Guy offered in the comments section of the February AE Report.

"B&N’s Nook isn’t half the store it used to be, and yet it is still selling more ebooks than Kobo.

I’d say that makes it a good target for Kobo to buy – if the price is right."

Kobo, like Google Play, sells far more widely than just these countries, so the gap might not be quite as wide as painted here.

Grabbing Nook while it still has a substantial customer base would be a great move from Kobo (better than waiting until Nook is finally closed and then mopping up the customer base that is left) and compliment its presence in the Us through OverDrive.

If Rakuten were able to blend the Kobo-OverDrive-Nook customer base and work all three in tandem (as they are starting to do with Kobo-OverDrive) that could be significant.

It would be interesting to see OverDrive and perhaps other digital library downloads factored into the US figures to show a clearer picture of ebook reach.

OverDrive saw some 200 million ebook downloads last year, mostly from the USA, which makes OverDrive the second biggest player in unit ebook reach (as opposed to unit sales) after Amazon.

[…] make up a significant share of trade book sales in the US, UK, and other English-speaking countries but things are quite different in […]

[…] is the single largest ebook retailer in the western world and accounts for an estimated 82% of ebook sales in the top five English-language markets, but in China and many other parts of Asia Amazon is still […]

[…] painful to use that online sales are also declining). While one estimate said  Nook ebooks sales exceeded Kobo ebook sales in 2016, you shouldn't bet money on things staying that […]