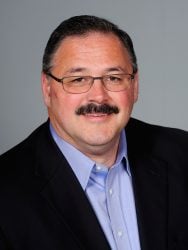 Barnes & Noble’s senior management went through a short round of seat shuffling today as the retailer named its next CEO.

Mike Huseby, who has been B&N, Inc. CEO since January 2014, will give up all of B&N, Inc. duties when the college division is spun off, becoming executive chairman of B&NE. B&N chairman Len Riggio thanked Huseby for putting B&N in a position “to separate the college and retail businesses. Mike will now bring his financial and strategic leadership to the separate Barnes & Noble Education company.”

So B&N (at least the part which will be visibly operating under the brand we know and love) is hiring the head of Sears Canada to run the company.

The thing about Sears Canada is that the company’s annual reports reveal that it is in basically the same shape as B&N: both retailer have been shrinking every year for the past umpteenth years, and no one in charge seems to know how to get the companies growing again.

But I’m not so sure how relevant that is to Boire; he only joined Sears Canada in 2012 as the Chief Merchandising Officer and only took the acting CEO job in October 2014. In other words you can’t really pin Sears Canada’s decline on him; he wasn’t there long enough. Before that he was the CEO of Brookstore (this was several years before the bankruptcy) and a regional president at Toys-r-Us.

It’s difficult to judge how well Boire will do the job but I have decided to be optimistic. Unlike Lynch, Boire has a lot of retail experience and he has some experience in trying to turn around a sclerotic and decrepit retailer.

With that in mind, the worst I expect is that B&N will continue to tread water. But if they’re lucky Boire will pull off a miracle and rescue the company. While the latter is improbable it is certainly not impossible.

P.S. Here’s one prediction for you. If given a chance Boire is going to kill the Nook. It’s a money pit, and he has no attachment to it and thus no reason to keep it around. But Boire might not be given the option of killing the Nook; Riggio might be protecting it. We’ll just have to wait and see.

Author Alarms Helps You Find Your Next Read

Did Nielsen Report US eBook Sales Were Down in 2014, or Volume?

With a 66% drop in device sales last year, there won’t be much left of Nook to kill or save.

A lot will depend on whether he can get them out of that attrocious Samsung contract.

[…] was just over 13 months ago that B&N announced that it was hiring Ron Boire. the acting CEO of Sears Canada, to take over the CEO role at […]