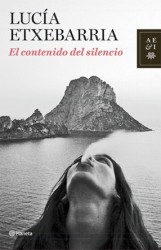 From the cutting off your nose to site your face dept…

The Guardian is reporting tonight that Lucía Etxebarria, an award winning novelist, has announced that she’s going to quit writing. She posted the following update on her Facebook page. The original was in Spanish, so this is actually a translated version: "Given that I have today discovered that more illegal copies of my book have been downloaded than I have sold, I am announcing officially that I will not publish another book for a long time."

Normally I would regret an author giving up writing, but not in this case. Etxebarria might complain about piracy, but she is also neglecting to do anything to stop it. She is a perfect example of why most pirates are frustrated customers.

Etxebarria’s latest novel, El Contenido del Silencio, was published in October but is not available as a legal ebook, even though you can find it on various illicit websites. Why? "We decided against publishing it as an ebook because that is easy to pirate. It would have been like throwing it straight to the lions," Etxebarria said. That worked well, I must say.

Actually, her refusal to release an ebook renders this situation as fairly straightforward. Since she has refused to sell the ebook, her readers have gotten it elsewhere. If piracy really bothered her that much then she would be offering a legitimate alternative.

How can anyone be angry about pirates while simultaneously not allowing customers who want to buy an ebook to pay for the content? I don’t get it.

I know that I’ve already pissed off a number of people by this point, but let me tell you where I’m coming from.

The reality is that the the faceless mob (the internet) is the one that decides whether content gets released as an ebook. Authors can claim ownership and moral rights, but they have long since lost any effective control. I’m not making a moral judgment here; this is a statement of fact.

Take JK Rowling , for example. She refused to allow ebooks for the longest time, but her novels were still released as ebooks within days (if not hours) of the official launch. It is not something one can stop, so one must learn to survive in spite of it.

My greatest issue with Etxebarria (and the reason why I don’t respect her) is that she refuses to face the reality of her situation and adapt to face it. I could name you any number of authors or publishers that have learned how to thrive in spite of piracy, but I won’t. That list would include pretty much the whole of publishing (with the exception of a few holdouts).

Kindles Still Winning Over Nooks In the Classroom (Infographic)

On the occasions I’ve had to "obtain" e-books by unconventional means, I’ve made a point of buying the hardcover to support the author.

Frankly, a legit copy is much preferred, not only morally, but in terms of less annoyance and effort.

Wow, talk about clueless about technology! What did she think, if she didn’t release an ebook, someone would have to type it into a Word file to pirate it? But threatening to quit smacks of taking her ball and going home. I guess it will sure show us, won’t it?

Talking about calling the kettle black…

Wikipedia has her listed as a "Spanish Plagiarist":
http://en.wikipedia.org/wiki/Luc%C3%ADa_Etxebarr%C3%ADa

So who is stealing from who?

So many petty comments for such a petty argument. You’ve lost a reader. But please keep writing.

Good article, but she’s not Basque, was born in Valencia.

The problem, as you mentioned, is that there is no digital version of his novel. The only option in that case, download it from P2P.

Important: in Spain it is legal to use P2P networks, because the law considers private copying. The culture industry insists on criminalizing the user, but are not giving legal options for online shopping.

Sorry, I was working from Wikipedia, and it identified her parents and her last name as Basque.

[…] about it, so there’s not much point in getting upset. It’s a healthier viewpoint than some writers have.source /**/ Tags:No Comments so far ↓There are no comments yet…Kick things off by filling […]

I think the Oatmeal explained it pretty well here:

If you don’t make your content available in a digital format in an effort to curb piracy, you will be pirated. People WANT digital, and they’ll pay for it, but if you don’t offer it, they’ll go where they can get it.

That wasn’t written until after this post, but yep.

[…] digital release of his books; the ebook was released despite his disapproval.  Like JK Rowling and Lucía Etxebarria, Stephen King might claim a copyright and he might claim moral rights over his work but actual […]

I partially disagree with the statement. I understand your point, it’s pragmatic, but as an author, as an artist, any can choose what is the form you want to sell your books.

No. This comment sounds silly. First, a writer is not always a businessman, her job is to write, an when you spend several years to write a book, you can be very disapointed when things turn like that, can you understand that?