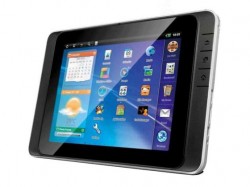 It’s running Android v2.2 on a 1GHz CPU, and that is a weakness.  To put it simply, Android v2.2 is last year’s operating system.  I wouldn’t buy a new tablet that used it because the next iteration of Android is so much better.

If you click on the picture you should recognize it as being very similar to the Bebook Live. The tablets have virtually identical specs and really, the only difference I can see is that the Bebook Live also has a camera. This table has also shown up in Spain as the  DaVinci and in Russia as the effire CityNight.

Kobo Shows That HTML5 Reading Apps Have Come of Age

If they iron out all the kinks and get software working right, i have no problem with last year’s software. it’s the integration that counts IMHO.

If the Apple/iOS ecosystem has proved one thing, it’s that hardware specs are not all that they are hyped to be, it’s the software integration that counts.

Yes, and the next version of Android (Gingerbread) is where they got the software right.

I bought this tablet a couple days ago, in fact I’m using it right now. Although much of the information online says that it ships with android 2.2, mine came with gingerbread 2.34 out of the box and it works like a charm.

Is it just me, or does the benq not have the android market?