One of the ways to tell that you’re in a bubble is to look for companies making ill-advised and poorly developed investments into markets or industries they don’t really understand. Today I came across one such example.

Big W is a big box retailer in Australia with 178 locations, and they’ve just announced a new ebookstore that will supposedly offer great deals and focus on the Australian ebook market:

Retail chain Big W has launched its own electronic bookstore business focusing on Australian content in a bid to offer "a bit of homegrown competition to the likes of iTunes and Amazon".

Launching the site, which opens with a library of 300,000 titles, Big W said it would offer "hundreds of titles each month for as little as 99c or free", aiming to provide "books Australians love including Australian fiction".

To be honest I don’t see how Big W is going to be a threat to anyone.

It’s not just that they offer a limited selection of only 300,000 titles (against ebookstores that offer millions of titles) but I also doubt Big W will have much of an impact due to their lack of reading apps.

I spent a few minutes this morning looking at the ebookstore, FAQ, and help pages, and I was surprised when I discovered that Big W doesn’t have their own reading apps for Android and iOS. Having an app with an integrated ebookstore is de rigueur for the modern ebook market because it makes it a lot easier for customers to access their purchases, and yet Big W didn’t bother to invest in the apps.

Until they have a better selection and reading apps, Big W is not to be taken seriously.

Or to put it another way, the lack of content and the lack of apps is a sign that BigW doesn’t take this market seriously. They’re not making the investments needed to compete with the frontrunners, and that can be taken as an indicator of their level of interest.

They’re not, really, and that is probably why the BigW ebookstore won’t amount to much. 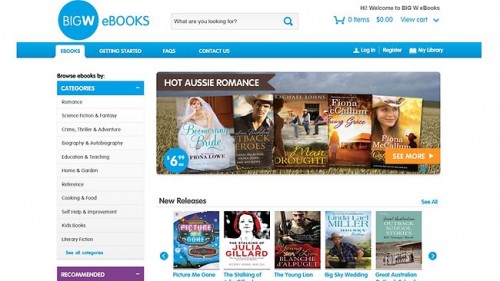 But even though the BigW ebookstore won’t amount to much, the fact they launched it is noteworthy.

At last count, the Australian ebookstore is dominated by Kindle and iBooks with a combined 70% to 90% market share, with Kobo, Google Books, and other smaller competitors (including JB Hi-Fi, Sony and ebooks.com) making up the rest.

Sony and JB Hi-Fi were the 2 most recent ebookstores to launch in Australia (in April 2013 and May 2013), and now that BigW has also opened an ebookstore I think we can safely say that everyone is expecting the Australian ebook market to take off.

I know that might sound like a wildly overreaching guess, but I am looking at 3 companies that recently made an investment in a market that doesn’t appear to be big enough to offer a decent return. Once is a mistake, twice is a coincidence, but three is a consensus belief that the market will grow enough to justify the investment.

The latest info I have on the Australian ebook market pegs it at about 10% of the overall Australian book market. I’m not sure how accurate that figure is, but with the increased competition it can only go up.

I checked out the Big W site last week, when they launched.

So, yes, I think that Big W’s ebook store will be a success, what with selling ebooks for more than the already ridiculous list price and all.

Oh yeah, and the site is very, very slow.