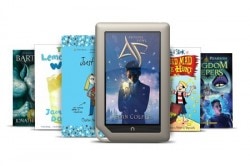 Summer has begun and school is getting out. Right about now is when kids start to regress back to their primal caveman state, the first sign of which is forgetting what they’d learned over the past school year.

This has long been a concern of educators and parents, and that’s why so many have pushed their kids into participating in summer book programs. Any effort to encourage kids to retain what they’ve learned is a good thing.

But what’s the best way to go about it? After extensive testing I can assure you that osmotic techniques like throwing the books at a kid’s head generally aren’t effective ways to inculcate knowledge. This forces us to go back to the tried and true method of finding interesting books for kids to read, and B&N can help you there.

They’re running a new sales promotion. Starting today, if you buy a new Nook Tablet you’ll have the option of choosing up to 6 free kids ebooks from a list. It looks like you have to buy it in store (and not the website), and that can be a drag. B&N has already announced the first titles available, which will be available until 15 July. More titles will be added later in the summer/

You can find out more on the B&N website.