B&N Has Dropped the Price of the Nook Touch, NookColor 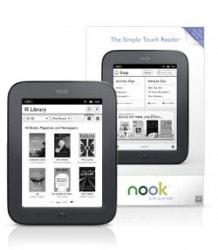 It looks like Barnes & Noble have decided on a response to the new K4 and the Kindle Fire, which Amazon launched late last month. It looks like they cannot afford to drop the price of new Nooks, so they are using returned units to offer a lower price.

You can now find a refurbished Nook Touch for $80. That’s down $27 from the previous price for a refurb, and it’s also (not so coincidentally) the same price as the ad-supported K4.

That’s a pretty good price for the 6″ ereader, especially considering that it comes with the same warranty as a new Nook Touch and you’re afflicted by the ads on the K4. If not for the fact that i don’t much like B&N as a company, I would recommend this ereader.

Barnes & Noble have also permanently dropped the price of the NookColor. yesterday someone had it on sale for $135, but B&N were also selling it for $150.

I’m not sure that yesterday’s sale price means much; this new refurb price for the NC is clearly a response to the Kindle Fire costing $199. B&N and Amazon are clearly in the middle of finding a new equilibrium for the ereader tablet, and until things calm down it’s going to be difficult to find meaning in the sales and special offers.

But is this really the best response to the Kindle Fire? Barnes & Noble are undercutting the KF price, yes, but they are also undercutting themselves. These cheaper refurbs come with the same warranty and B&N make a lot of effort to reassure buyers about the low risk of hardware failure. In the long run, B&N are going to lose sales of the new Nooks.

Would you buy a new Nook instead of a refurb? I’m cheap; I would get the refurbished unit. But I’m curious to find out if there’s a reason people would spend the extra money. The $100 extra for a new NC would go a long way towards buying ebooks.

Infographic: Goodreads 2012 By the Numbers

How to read a PDF on an Android tablet

I’m starting to get a bad feeling about these B&N refurb deals.
They seem to have an endless supply of them…
Considering they still have Nook1s on hand, I find myself wondering: Sometimes, companies use "refurb" sales to move unsold retailer returns that are actually new and untouched. And these refurbs have full warranties not the truncated warranties typical of other companies' refurbs…
I don’t doubt B&N has seen good sales on all 4 Nook models, but we don’t really know what their expectations were like, how many they have in the pipeline.
At these prices, or even the previous ones, shouldn’t they have run out of them?
Those are really tempting deals but with the ever-dropping prices…
I dunno.

Misleading headline. The word "Refurbed" should be in there.

The price discrimination comes from in-store vs. online sales.

I’m not sure, but I believe that "refurbished" units are not available in stores for same day purchase- you have to order from the website and wait for delivery, then hope noone steals the package off your porch (boooo click and wait).

At one point 90% of nook sales were in-store. I don’t know what the figure is now.

I recommend any nook at any price. But then, Barnes and Noble is my favorite company in the world:)

[…] a funky screen, but so is the Nook Touch. And the Nook Touch is actually a better option becuase you can get it for $80 – or just over half the price of the Sony Reader PRS-T1. True, that’s the refurb price, […]

[…] to begin shipping on October 28, two weeks before the Kindle Fire. Meanwhile, The Digital Reader notes that Barnes & Noble (NYSE: BKS) just dropped the price of the refurbished Nook Color to $149, […]