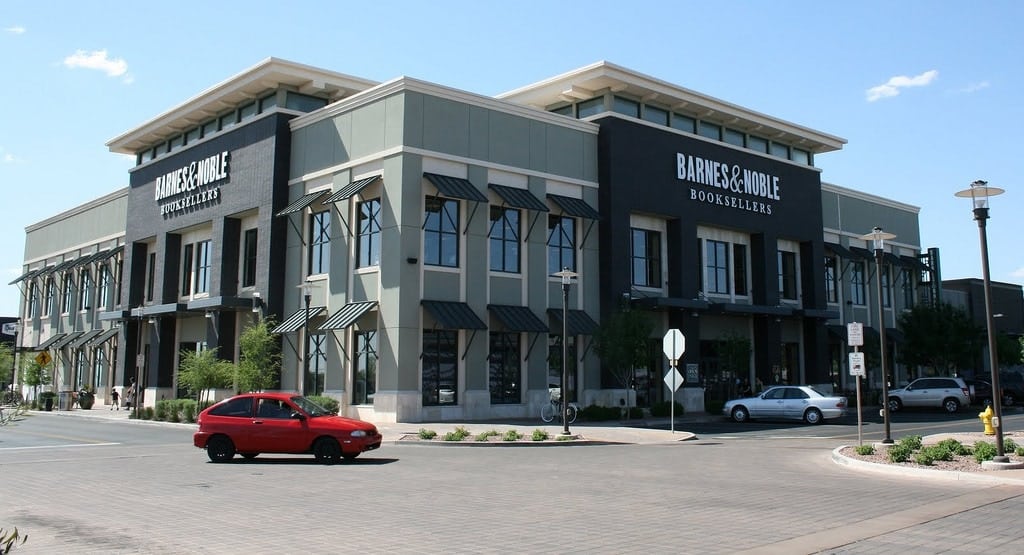 Barnes & Noble released their fiscal 2017 earnings report today, and the news was as bad as you would expect.

The one bright spot were online sales, which grew 3.7% for the full year and 2.9% for the quarter.

It is not easy to tell from the available data, but it appears B&N hs not had an increase in sales since the fiscal year 2009.

I have the previous six fiscal reports in front of me, and they show that in all those years B&N’s growth came from one of two places: B&N College, which belonged to B&N between 2009 and 2015, and Nook.

B&N’s retail sales continued to decline while Nook revenue grew, and when the Nook imploded in late 2012, B&N never recovered.

Revenues have declined ever since, and yet for some unknown reason B&N has paid out a dividend for each of the last seven quarters. B&N’s poor showing does not justify paying a dividend, which is why my current working theory is that the dividend is being used to buy off major investors and keep them from calling for the liquidation of B&N.

In addition to exceeding prior year operating results, excluding non-recurring charges in both years, consolidated EBITDA was $187.2 million in fiscal 2017, in-line with guidance of $180 million to $190 million, versus $185.7 million last year.

For the full year, consolidated EBITDA was $172.2 million, as compared to $150.5 million a year ago. NOOK EBITDA losses decreased $47.3 million to $17.3 million, as the Company continued to rationalize NOOK expenses. Retail EBITDA of $189.5 million declined $25.6 million, primarily due to the sales decline.

"While fiscal 2017 proved to be a challenging year for the company, we reduced costs by $137 million, enabling us to sustain our profitability level," said Demos Parneros, Chief Executive Officer of Barnes & Noble, Inc. "In fiscal 2018, we are focusing on ways to improve the business and reignite sales through an aggressive test and learn process and companywide simplification process that will take out costs."

The company ended the fiscal year with $64.9 million of debt under its $750 million credit facility. During fiscal 2017, the Company returned $67 million in cash to its shareholders through dividends and share repurchases.

For fiscal year 2018, the Company expects comparable bookstore sales to decline in the low single digits and full year consolidated EBITDA to be approximately $180 million.

Shouldn’t be a surprise considering how many stores they have closed down and how poor their marketing is.

If BN would just have listened to their customers. Why put your money in them when they just don’t care? They put an e-ink reader out there but have done nothing to fine tune it. Why should we trust them at all when they have stagnated their reader? They are so far behind their competition when they were at the front in the beginning. It is so sad. I was so on their side but I have given up on them and just don’t care anymore.

[…] It has seen its revenues decline every year for the past decade, and its one real hope to reverse the trend, the Nook, imploded in the 2012 Christmas season and never recovered. […]

[…] first problem is that B&N doesn't sell a whole lot of ebooks anymore.  Their Nook revenues in the last fiscal year totaled $192 million (in comparison, Amazon paid out more to authors whose books are in Kindle […]