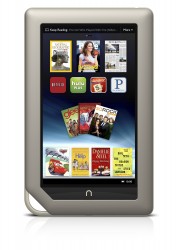 It looks Amazon won’t be the only one with great tablet sales this year.

Digitimes is reporting new rumors passed to them from their usual industry sources.  Barnes & Noble is reported to have received over a million of the new Nook Tablets from Inventec, the manufacturer. There are also reports that B&N has expanded new orders for the NT because of good sales over the Thanksgiving Day weekend.

This might not measure up to Amazon’s rumored success, but if B&N manages to sell a million Nook Tablets this year then they will be one of the top manufacturers. It will also be a great first month of sales. To put these sales in perspective, the RIM Playbook only sold 250 thousand in its first month and the Motorola Xoom, Google’s flagship Android tablet, only sold a 100k.

But we also shouldn’t read too much into this. Just because B&N orders a lot of Nook Tablets and gets them in the warehouse doesn’t mean that they’re actually selling them. Nor does it it mean that customers aren’t returning them, like I did with mine. In fact, I would bet that B&N will see a fair number of returns. Look at the steady supply of Nook Color refurbs. Barnes & Noble gets so many of those back from customers that they can supply Overstock, Walmart, and still have enough for the occasional sale on Ebay. No matter how many NC they might be selling, that’s still a large volume of returns.

Have you noticed any repair issues with the Nook devices or are the large number of returns simply a buyer’s remorse or Kindle envy thing?

I’ve generally considered BN devices to be better than competitors, so I have a hard time understanding why this is going on (if it really is).

Thanks for the informative site, Nate. My recently purchased refurbished Nook Color ($119, eBay B&N outlet) is great. I’ve already made a CM7 ROM for it and am very pleased with the Nook’s performance in native and CM7 modes. Perhaps it’s a matter of expectations. I don’t expect this thing to be an iPad; in fact, I’m glad it’s not. I had considered the Nook Tablet, but decided to wait because it’s not as amenable to modding as the Nook Color. Anyway, the NC does what I need it to do, and does it well, and the price was right! Whether it’s buyer’s remorse, Kindle envy or whatever, I’m happy for the returns, though I share Robert’s curiosity about the issue.

I don’t know that the refurbs indicate a high return rate at all.

I have a refurb as well- looks like I’m the original owner.

It’s the same reason that Barnesandnoble.com gives 8% cash back through ebates and similar programs – simply listing at a lower rate would trigger Amazon to lower their price.