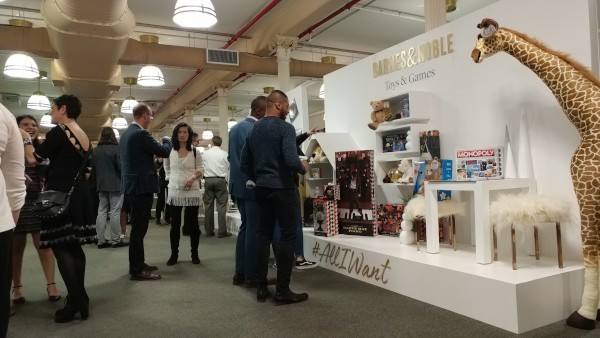 When B&N’s holiday sales weren’t declining in the past five holiday seasons, they were flat, but that hasn’t stopped them from putting on a brave face last week.

The retailer unveiled its strategy for the upcoming holiday season at  media event at its flagship store in Manhattan.

At a media event at its Union Square store in Manhattan last week, Barnes & Noble unveiled its holiday gift guide and seasonal sales strategy. The push involves two new interactive apps, a new Nook model, unique editions of big books, and a streamlined approach to selling its toys, gifts, and other non-book items.

The big news on the Nook front was the Nook GlowLight 3, which B&N is retailing at $119.99. The screen is the first Nook model to use "enhanced front light technology," the company said, which provides "a cool white light" during the day or in rooms with bright light, but then manually or automatically switches to an “auto night mode” with an orange tone for reading in dark spaces.

Another technological enhancement the retailer rolled out for the season is the introduction of two "Smart Tools," or apps: Book Graph and SmartGift. The former, available only from a desktop computer, is an "interactive discovery tool" which, the company said, displays a "matrix of titles" after shoppers click on a book that interests them. (After clicking on the initial title, consumers will see a number of books related in some way—thematically, for example—pop up to the right of the original choice.) The tool, B&N said, is intended to increase discoverability on BN.com.

See, the problem with the show that B&N put on last week was that I could find no mention of B&N presenting a compelling reason why consumers would want to buy from them and not another retailer.

The niftiest gimmicks aren’t going to boost sales without a reason for customers to come in the story. Frankly, Barnes & Noble has been the "pity" buy for years, and that just won’t cut it.

You wrote: "See, the problem with the show that B&N put on last week was that I could find no mention of B&n [sic] presenting a compelling reason why consumers would want to buy from them and not another retailer."

Your statement is true, but too limited. No retailer provides a compelling reason to buy from them, not even Amazon, retailing’s leader. People buy from a retailer because the retailer happens to have what they want when they want it at the price they are willing to pay.

I buy books from B&N online rather than Amazon because I much prefer the B&N website. I’ve never liked Amazon’s design and find it annoying. Pricewise the two are equivalent. On some books Amazon is cheaper, on others B&N is cheaper, on others the price is the same, and on most where there is a difference, the difference is nominal.

Well, the plaint does apply to many retailers but not necessarily Amazon. (There’s this thing called Prime, among others. Like KDP Select, Alexa, Dash, etc.)
Still, even accepting that it also applies to Amazon in some people’s eyes, there is still one critical difference between Amazon and B&N presented right at the beginning of the piece: B&N holiday sales seasons have ranged from bad to awful for most of this decade. They absolutely positively need a great holiday season. None of the highlighted moves offers a clear path in that direction.
In fact, early indicators are that a bad bookselling holiday season is headed our way if a recent Forbes report on August front list sales is factored in.
Companies in distress often confuse flurries of random activity with forward progress until the quarterly results filter in. B&N has been very active over the past few years with nothing to show for it on the competitive front.

Where are the indications that this year will be any better?

So far, the market has been defending the BKS stock price near 20-year lows so perhaps it knows something that isn’t apparent — like (maybe) a rescue buyout from Rakuten — but I have my doubts.

Until I see evidence to the contrary, I’m still expecting B&N to snatch defeat from any potential victory that they might have. Short of outright fraud like Enron, B&N has gotta be one of the most mismanaged companies in history. I don’t see that changing, regardless of any pretty faces that might come their way.

Most of all, I’m sure not giving them any money; there are much better alternatives no matter what the product.

A book my daughter wanted came out Tuesday November 7. Amazon only had the ebook. My daughter (age 11) only wants print for her collection. We stopped in to BN yesterday, and there was the book. 1 copy, hardcover, with some exclusive BN bonus chapters. So I am guessing they had a special publishing deal for this book. I paid about $5 more than I probably would have, had Amazon had it. But my daughter was delighted (her birthday is this month). I guess that is one way they will draw customers, though I had no idea it was even in print anywhere, until we found the book there. (And it was the only copy on the shelf!)