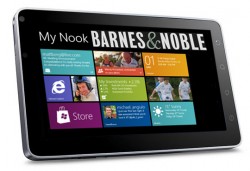 few months I have been saying that the international Nook Store actually belonged to Microsoft, and it seems that my snark may have had a grain of truth.

Barnes & Noble and Microsoft have filed a new Form 8-K with the SEC today, and it has revealed that Microsoft is going to be taking a more active role in the ebook market.

According to the filing, MS and B&N have agreed to retire the existing Nook app for Windows 8. It’s going to be replaced by a new reading app from Microsoft.  This app has not yet been launched, but at the moment it is being called the Microsoft Consumer Reader. The new app will be co-branded with mentions of both Microsoft and Barnes & Noble.

Technically the filing says that B&N "would be permitted to discontinue distributing the NOOK Windows app". It makes the same statement about the Nook Windows Phone app, which has not yet been released (and now probably won’t be).

While that does not explicitly say that the Nook app for Windows 8 is dead, I don’t think I am misinterpreting the filing.

There aren’t any details available yet as to what Microsoft’s new reading app will do, but we did have some clue that it was coming. Microsoft has been dropping hints since late last year that they were interested in developing reading apps. In addition to the leaked details on a reading app for MS Office, there were also signs that Microsoft wanted to release a second app – more specifically, a consumer reading app.

I think I may have been the first to notice their interest; last October I pointed out that the R in the name for the Xbox MVR team stood for reading. My speculation was subsequently confirmed by a job listing which Microsoft posted in February 2014.

Update: A couple screenshots were included with the filing (found via Publisher’s Lunch). As you can see in the images below, the new Microsoft app looks nothing like the existing Nook Windows 8 app.

Barnes & Noble has also been telegraphing that they no were longer interested in developing apps for Windows (or OSX); the Nook app for Windows 7/XP as well as the Nook app for OSX were formally abandoned last June after being neglected and ignored for well over a year. While B&N had continued to develop the Windows 8 app, it was pretty clear that they were under contractual obligation to do so.

Microsoft has been an investor in Nook Media since it was spun off of Barnes & Noble in early 2012. They initially invested $300 million in the firm, and they committed to paying up to another $300 million in operational costs (the exact amount has not been made public). The additional funds were dependent on B&N meeting certain goals in expanding the international Nook Store; as of the latest quarterly report B&N has not met the goals.

I wonder if that means we’ll see a new app that works with Windows 7? Probably not, but we can hope .

I doubt it. MS doesn’t care about us Win7 users.

I wonder if Microsoft regrets their earlier decision to abandon the ebook market and to ditch their (dot) LIT ebook format?

They probably regret ignoring it for a decade, but by the time MSReader was killed it was pretty much dead. It was technologically outdated (Epub), did not run on either Android or iPhone, and didn’t have a lot of support from publishers.

Well, now…
LIT was effectively oeb 1.0 in a Microsoft wrapper so it would’ve been trivial to do LIT 2.0 as epub2 in a Microsoft wrapper. Say, circa 2009-ish…
What MS is now recognizing is that they should have updated LIT instead of killing it. Microsoft’s real problem in content was their reliance on partners instead of taking on a bigger load themselves. With XBOX they finally realized that if they want the boundaries expanded, they have to do it themselves.

Yes, but by 2010 the MSReader app had outdated typography that looked ugly compared to its competition. MS probably also no longer had a team who could have developed a new app and a new version of LIT.

Interesting. My Windows 8 PC came with the Nook app and the Kindle app already installed. I haven’t tried the Kindle one because I have a Kindle Paperwhite, but I used the Nook one to check out one of my own books to see how it looked. The app was pretty nice once I figured out I had to right click to get to the menus (Windows 8 is in love with right-clicking). But from what I hear, Window 8 may not be long-lived. It does pretty much suck as a PC operating system.

As B&N has never been able to afford the developers needed to support their software (every new fix or version takes a long, long time), this is probably a good thing.

[…] Remember the news from March that B&N and MS had decided to retire the Nook app for Windows 8 and replace it with a Microsoft-built app? […]