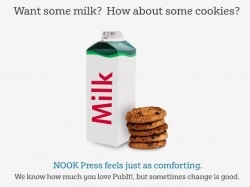 When Barnes & Noble launched Nook Press in early April 2013 they made it clear that its predecessor,  the nearly 3-year-old PubIt, would shortly be shutdown. It looks like that day has come.

Barnes & Noble has been sending out email today to all of the authors still using PubIt. The email is short and sweet, and it all it says is that the self-pub service will be shut down early next month.

PubIt was launched in late 2010 in response to Amazon’s Kindle Direct Publishing, but it’s never been clear just how much success the platform has had. B&N has declined to share any solid info on the number of titles or authors that used PubIt, not even when Nook Press was launching. At that time B&N only shared vague details about PubIt’s growth, leading many (including this blogger) to wonder exactly what B&N didn’t want us to know.

It’s been nearly 3 months since B&N announced Nook Press, and while I don’t know that there are any authors who like the service or prefer it to PubIt I can tell you that B&N has updated Nook Press several times. One update that stands out was announced in early May and added the ability to edit previously published ebooks. No, I can’t believe that was forgotten at the launch of Nook Press, either.

It’s a good thing that B&N has been releasing updates to Nook Press, because the early user reports variously described it as simply nonfunctional, useless, a joke, and such a terrible experience that one author gave up and went back to using Smashwords. I also know of several authors, including the one who tipped me to this story, that have not seen a compelling reason to try Nook Press.

If you have tried Nook Press and prefer it to PubIt (or vice versa), please leave a comment with your experiences.

Multi-touch iBooks on the iPhone: Like a PDF, Only From Apple

I dealt with it an hour ago to change the cover on a published ebook. My review: Meh. It goes on about "Manuscript" and "Edits" when all I want to do is upload my already-formatted epub, which is an irritation and a distraction. Changing cover on the "Manuscript" only resulted in a kludge with new cover on one page and old one on the next. No, thanks.

As for other bugs/features, there is no way this author is going to do that "collaboration" thing BN is so excited about. It is not aimed at the professional putting up already edited and finalized backlist, and that’s not how we do frontlist. I don’t know what category of writer it’s aimed at. Certainly not the one I’m in. When we all heard about it, the universal question we asked was, "Why?"

The one thing Nook Press has over Amazon is that a project isn’t taken down for 12-48 hours every time you want to fix a typo, but the changes take 24 hours or so to trickle through the system. Slight advantage BN, there.

I’ll still keep the books there and add new ones, as they sell in small but steady numbers compared to other outlets. Every little bit helps. But all I care about is plain and simple upload cover, upload epub, put in metadata, load up, go. The rest for me is pointless.

Judith wrote:
"It is not aimed at the professional putting up already edited and finalized backlist, and that’s not how we do frontlist. I don’t know what category of writer it’s aimed at. Certainly not the one I’m in. When we all heard about it, the universal question we asked was, “Why?”"

And I think you’re not at all alone with that. I’m really puzzled why Nook/B&N chose that path, as well. I think it misunderstands the broader landscape of what independent publishing has become. I get the collaborative thing and think it’s a cool feature even for some pros. But it does ignore the fact there are indie authors who gladly pay for professional production services and simply need a tool to upload and publish. PubIt did that.

Couldn’t agree more. I have no idea what all the other bells and whistles are useful for. And I can tell you — this platform is NOT succeeding at :

It’s purely anecdotal, but a measurable number of my shop’s pro author clients take delivery of the mobi and epub files we make, and then publish the mobi through KDP Select while sitting on the epub until the exclusivity period ends. Some of them never even bother to publish at Barnes and just re-enroll the title in KDP Select. One author in particular, who was adamant about having the widest possible coverage, now only wants the mobi because the sales she sees through Barnes and the outlets Smashwords distributes to aren’t enough to justify the time and expense of maintaining her catalog.

As far as feedback on Nook Press goes, the only report I’ve gotten is from an author who got a little nervous after he uploaded. As I understand it, the software counts the number of XHTML files in the epub and reports something along the lines of "This book has 25 chapters. Is this correct?" It’s just a simple verification step. He was worried because his book had 19 chapters plus an epilogue and didn’t realize that his front and back matter were being counted as chapters. Other than that… crickets. Obviously, this doesn’t mean our clients are *not* using it; it’s just that they’re not telling us what their experience is like.

It’s usable now, which is an improvement.

I don’t get the collaboration thing either, other than everything has to be "social" now.

I did the switch last night. It was painless. One button click, login with my PubIt credentials and all was shifted to Nook Press. I did a small change in a description just to test that it worked. It did and book was not taken offline. I like the new reporting capabilities and being able to more easily navigate between titles.

I will be uploading a new title next week, so will then see how easy/hard it might be. Actually, I don’t anticipate it being any harder than uploading to Kobo or Amazon. For me, the most convoluted upload process is Apple. Oy!

As for why bother, I’m a spread the wealth kind of gal. I’ve been in the software industry for 30 years. One thing I’ve learned is that you never know who is going to be on top and putting all your eggs in one basket rarely pays off. Yes, Amazon is on top now. Yes, the majority of my sales come from Amazon. But I’m not going to be exclusive with them. Why leave money on the table?

My Kobo sells have been doubling each quarter. My Apple sales (in spite of the uploading timesink) are now 60% of my Amazon sales. B&N has not been a big seller for me, but now that they are separating the ebook side and letting go of the hardware side they may turn around. Who knows?

There’s a lot of discussion about the possible connection between a precipitous drop in self-published unit sales and the launch of Press on the B&N author boards:

[…] PubIt! Done (The Digital Reader) After launching Nook Press, it’s not a surprise that B&N is retiring its older self-publishing solution. Nook Press was launched in April. PubIt! will close shop in July. […]

As a PubIt user, I found PubIt to be sluggish at best and nonresponsive at worst. When Nook Press came alone, I studied the terms and found them draconian. I did not sync up my PubIt account with Nook Press for that reason alone, never mind the fact that I had few to no sales in the first three months of 2013. Something occurred in January which I was not privy to, and there was no actual discussion of it by PubIt on the boards. So I returned my title to Smashwords, which I had used to reach Barnes & Noble before, because communications with PubIt was also few to nonexistent. It seemed to many that PubIt never wanted to deal with the authors submitting the content. With Smashwords my sales have picked up with exactly the same files submitted, so my return to Smashwords was a sound decision. Nook Press seems to be operating on a flawed premise, that of treating the digital files like "manuscripts" and only allowing changes online. Nobody else does it that way. The file must be fully edited and finished according the standard specs, and if errors occur, the file is corrected by the publisher and then resubmitted entire. This was another reason why I chose not to use Nook Press.

Back in April I tried NOOK Press but every time I tried to access my sales details, I got the error message "Like a plot twist in a great novel…Something has gone terribly wrong." I was assured that it would be addressed, but that in the meantime I should be able to log in through the PubIt portal… which I promptly did.

I have just logged into NOOK Press and the problem hasn’t been addressed at all. The only thing that has changed is that instead of the "Like a plot twist in a great novel…Something has gone terribly wrong” screen, I now just get a big "Oops…"

Is anyone else having issues with sales reporting or is it just my account?

This is an interesting discussion.
I have just published a second science fiction book in Create Space and Kindle and was thinking about using other platforms. However there are Kindle Apps for Android and iPhone so I thought to myself it hardly seemed worthwhile. Surely this is a problem for NOOK and other platforms – the physical bit of kit may be soon defunct. As I see it the stand alone reader will be taken over by Android type tablets with various apps. I have a traditional Kindle but am very pleased with reading on my Galaxy Note phone. An Android tablet would be even better.

The kindle experience is not perfect but is well established, as a writer promoting my own book I will probably find myself promoting the Kindle App at the same time.

I feel the future is in eReaders since they can be published at a reasonable price and give a reasonable return. A solid, 'real', book has a cost to print (and then postage) whether it is create space or Amazon or Barnes and Noble and as such must be a turn off for the prospective 'browsing' reader.
Now I find Amazon offering me the opportunity to sell my ebook at a discount to people who have bought my print copy. I welcome anyone who has bought the print version, but I think the offer might be better the other way around. Of course the margin on a print book is small anyway.