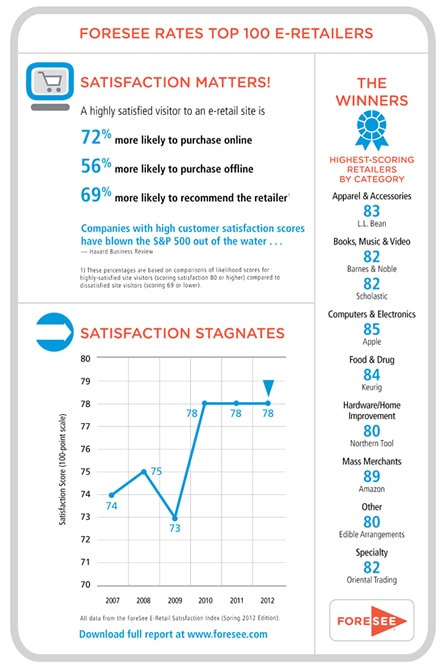 In what I assure you is a coincidence, Barnes & Noble issued a press release today with the news that their website rated high in customer satisfaction in a recent consumer survey. According to the ForeSee E-Retail Satisfaction Index, B&N ranked first in the Books, Music and Video category.

But a little digging reveals that B&N scored high in just the one category; when you look at the general satisfaction category, guess who won?

Earlier this morning Rich Adin posted about his experiences with B&N, so it was a little surprising to find out that the piss-poor procedure the B&N staff  used to resolve his issue came from a company that supposedly topped the CS ranking for the Books category. So I went looking for the answer, and with a minimal amount of effort I found Foresee’s own press release on the new rankings.

B&N barely made it into the top 10, in fact. They lost to such retail wonders as LLBean, Avon, and Keurig. They also tied with such great retailers like 1800Contacts, Oriental Trading, Scholastic, Vistaprint, and Walmart.

Okay, I’ll admit that I’m not being fare to the other retailers, but I’m irked at the way B&N corporate selectively told the truth in the press release. Do you want to know why B&N won the Books category?

It’s not that they beat Amazon but because Amazon wasn’t even listed as a media seller. Foresee only lists a retailer in a single category and that means Amazon was listed as a mass merchant, even though they sell a heck of a lot of books.

I would ignore the categories. Given how it distorts the appearance of the rankings, I would say that the categories are bad data.

Irex back from the grave!