Boogie Board Jot Coming This Fall 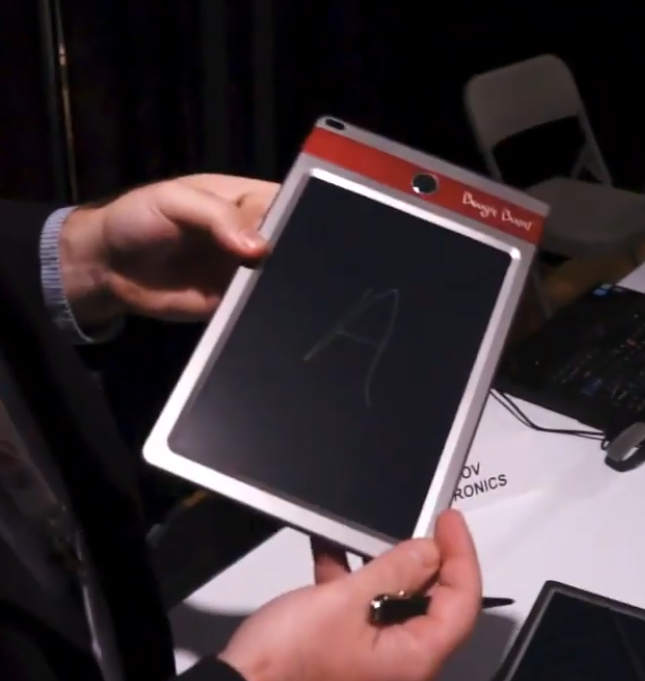 It’s been nearly 9 months since Kent Displays released their latest Boogie Board writing slate and they’ve been busy. Earlier this evening Kent Display showed off the new Boogie Board Jot at the CEA Line Show in NYC.

At first glance the Jot looks to be a copy of the original Boogie Board, but it turns out that Kent Displays has added some rather useful features. They’ve watched how the BB has been used in the past 2 and a half years since it launched and designed the Jot so it filled their customer’s needs.

First, they changed the shell. The Jot has a sleeker and more professional design than the original. It also has a slightly rough back so you can put it down without it sliding away from you. There’s also a new stylus which doubles as a stand, as well as a replaceable battery and a save switch (protects against accidental erasure).

On the back are a couple magnets so you can hang it on the fridge.  This will let it work like a message board. That makes excellent sense and I happen to know at least one person who has used the original Boogie Board for just that purpose.

This device is based on a proprietary Cholesteric LCD screen tech developed by Kent Display. The idea behind the Boogie Board is that you can write, draw, or scribble on it with a stylus or your finger. The screen will hold the contents without using electricity. When you’re done writing, you click the erase button and the screen is cleared (this part requires electricity). It’s something like a high tech etch-a-sketch.

The Jot is going to hit the market later this year with a retail of $40. That’s about the same retail as the original Boogie Board, so it looks like they might be planning to replace one with the other.

I haven’t had my hands on the Jot or the original Boogie Board but I did get to borrow the BB eWriter back in December.  The eWriter uses the same screen as the Jot and it has one important feature that the Jot doesn’t. The eWriter can save your notes as a PDF.

Maybe they could stick the UC Santa Cruz mirror paper on there.

Well, both my BB’s are still going strong but this indeed would be a very nice replacement. Though, I would want it black again, as our fridge is black as well…

I maintain that I am not interested until it has selective erasure.

If I am working on a scientific model and I realize I needed a minus instead of a plus, but the only way to change it is to erase the whole board and start over, then it is not useful to me.

If I am sketching out a design and realize that I need to change something, but the only way to change it is to erase the whole board and start over, then it is not useful to me.

If I am working out a plot for a novel and I need to change earlier details, but the only way to change it is to erase the whole board and start over, then it is not useful to me.

Can u simply line out what u don’t want w/o erasing the entire page?