Bookstores Aren’t the Future of POD – Print Shops Are 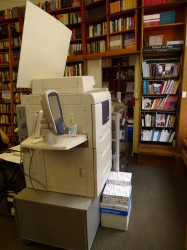 The Espresso Book Machine has been getting a lot of press lately and it’s being touted as the future savior of the indie bookstore. As the story goes, a bookseller can buy one of these (asking price is around $100k) and then they will effectively have tens if not hundreds of thousands of titles in stock, each of which can be printed one at a time whenever a customer wants to buy it.

I finally got to see one in person last week, and I’m pretty sure that the hype far outweighs any real value this device brings to a bookseller.

Yes, POD is going to become more common, but the Espresso Book Machine will likely have little to do with it.

I was in Boston for a conference last week. As part of my touristing I made sure to wander through Harvard Square and stop in at the Harvard Bookstore. This is a well-known indie bookstore, and they have an Espresso Book Machine on hand to print books for customers to buy. 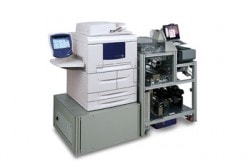 The EBM is a fascinating gadget and there are any number of details which aren’t obvious about it until you see it in person. One detail that had escaped me until now was that the EBM is actually an aftermarket add-on to bog-standard printing equipment. The one in the Harvard Bookstore, for example, uses a Xerox photocopier, a heavy duty Canon printer, and a third component, the actual Espresso Book Machine, which binds and trims the books after they’ve been printed. The EBM is actually a minority of the hardware.

This was quite fun to watch, but I think it’s important to note that print on location is really nothing new.  Print shops have been doing it for years. FedEx Office can do it and so can Staples, and they are each able to bind a single copy if need be. The only thing the EBM adds is that it has a smaller footprint and it’s (possibly) cheaper – but not necessarily by much.

According to the owner of Borderland Books (this is the latest info I can find), an EBM costs around $100,000 to buy (source) and it has operating expenses which are high enough that it would take 4 or more years to pay off the investment. That’s not exactly cheap, considering that a bookstore could hire a couple staffers for that price or buy around 25 thousand more books to stock.

BTW, I’m pretty sure the operating expenses are higher than the Borderlands owner calculated. Someone has to run the machine. While I was in the Harvard Bookstore there was one bookseller who did nothing but tend the EBM while it was operating.

Now, there’s one detail that I shouldn’t gloss over and that is that part of the value of the EBM is the distribution platform that On Demand Books has built. They have contracts with HarperCollins to print their out of print backlist (and frontlists of other publishers via Lightning Source). While FedEx Office, Staple’s and print shops have the equipment to bind a book they don’t have the nearly the same selection as offered by OnDemand Books nor (as far as I can tell) do they have the distribution system that is integrated into the EBM.

But that’s a relatively minor issue because there are already a couple services that can do just that (almost). For example, South Africa based Paperight, which left beta just over a month ago, has the long term goal of connecting customers who want to buy with publishers who want to sell via local print shops. They want to offer readers pretty much the same service as the EBM, only without the hefty capital investment (most print shops already have the equipment anyway).

And there’s also BookPrep, a little known service by HP. This is a POD service which is more focused on rescuing old works than it is on printing new books, but it is intended to get books out into POD distribution.

I mention Paperight and BookPrep because each is in the right position to grow into a competitor to the Espresso Book Machine. They’d need to sign up publishers, and they’d need to partner with print shops. FedEx Office in particular would look to be a good match (though independent print shops  would also work). They have over 1800 locations in the US and they have a website where you can have documents printed in mass.

It would be a little odd at first to buy a POD book via FedEx Office, I can see the appeal. There would be an immediacy of getting the book today and not later this week.

What’s more, I live within driving distance of a FedEx Office store but not any bookstore with an Espresso Book Machine. Given a level playing field, that alone would win the market.

That is, unless, the next generation model of the Espresso Book Machine isn’t quite so flipping expensive.  But we won’t know that until it happens.

I can buy a new laser printer for $200 which will happily churn out thirty or more books on A5 paper (at 1c per sheet) before needing a toner refill. If I really want them bound I can have it done at the local newsagency for about $4 each. Otherwise a bulldog clip does the job nicely. The Book Machine is a 'solution' looking for a problem.

I POD all the time — but less and less — as I find my ebook readers do a more convenient and faster job for me. I did see the Powell’s Books in Portland Espresso Machine over the weekend, with the operator sitting their looking bored. Didn’t see any books come out of the machine — at the same time Powell’s was selling literally 1000’s of traditional books. My favorite POD machine? Whichever laser printer in my house is closest to where I’m sitting!

The problem is the implied business model. POD shouldn’t be used only on customer request. Bookstores should still utilize their shelves. The POD’s primary use should be to replenish those shelves faster- so that stores can devote less space to multiple copies of bestsellers and more space to local and special interest titles that might not get a publisher print run.

The math for the machine itself doesn’t actually sound that bad – a 2-3 year payback period is generally considered a good return. And to get that they only have to print 3 books per hour, and only run it 8 hours a day (why only run the machine when you’re open?). That’s 7% capacity.

By all mean, if a customer requests a book not currently in stock, turn off the POD’s current job, and make it for them. Just don’t idle it the rest of the time.

Reading through the comments on that link I think I’m gonna order some Norwegian ebooks.

[…] Hoffelder (@thdigitalreader) on The Digital Reader Bookstores Aren’t the Future of POD – Print Shops Are “POD is going to become more common, but the Espresso Book Machine will likely have little to […]

[…] Espresso Book Machine is actually an aftermarket add-on to bog-standard printing equipment. The one I saw in the Harvard Bookstore, for example, uses a Xerox photocopier, a heavy duty Canon printer, and a third component, the […]

[…] One EBM model is pictured below, and as you can see it consists of a couple pieces of commercial printing equipment as well as the actual Espresso Book Machine (more details here). […]