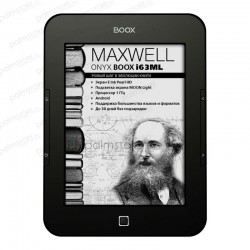 A second E-ink Android tablet shipped in Russia late last month. Like the Kepler tablet which shipped in June, the i63ML Maxwell was developed by Onyx. But unlike the Kepler (which had no touchscreen) the Maxwell is a true tablet.

It is also an important lesson about market dynamics, though it might not be obvious at first glance.

The i63ML Maxwell is available now with a retail of 6990 rubles (~ $211 USD). It’s based around a 6″ HD E-ink screen, and it has an IR touchscreen, frontlight, and Wifi. It ships with 512RAM, 8GB Flash storage, a microSD card slot, 2 page turn buttons, and a joystick below the screen. The Maxwell weighs in at 238g and is the size of a 6″ ereader.

Like previous Android devices from Onyx, the Maxwell is running Android 2.3 on a 1GHz CPU. But unlike earlier models the Maxwell is also going to ship with access to Google Play. Yes, the press release says that this tablet will be able to install apps and buy books from Google Play.

But I can add more detail. My source for this story was late in posting it, and they were beaten to the story by at least one reviewer who posted his opinion, a gallery of photos, and a video. The reviewer was working from a pre-production sample, so the review may not accurately reflect what the retail model can do.

But who cares, he confirmed that the Maxwell can play Angry Birds: 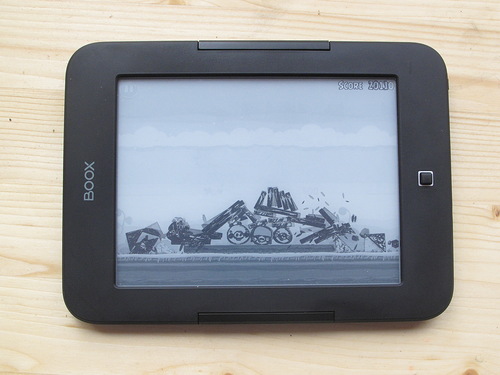 But the reviewer also mentioned that the Maxwell can’t do much more than that. A lot of the apps that were tried on the Maxwell failed.

I’ve embedded a gallery of a few of those photos at the end of the post. They confirm what the review and the press release say; this tablet runs an open form of Android. The review also mentions that this tablet has Google Play.

All this info is in Russian, of course, but Google Translate seems to have not garbled it up too badly. And if nothing else,  the visuals are still useful: 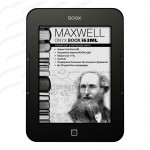 The Kobo Touch Will Not Ship in June

Reading on iPad before bed can affect sleep habits

The angry birds test shows no evidence of noflash. I think the demo of Boox promo device recently showed this? I think an e-reader marketed as an e-ink tablet must include noflash out-of-the-box. Otherwise why not buy a Nook STR in the clearance sales? I think it will include it, but the reviewer didn’t show it.

The reviewer did show the noflash at 7.48 in the video. He turned it on only for a short period of time.

There are several advantages of the Maxwell over a Nook:
1. A (slightly) higher Android version. This means that some apps that could not run on the Nook would potentially run on the Maxwell.
2. A much better frontlight. Nook has been the first frontlit e-ink device, but frontlight technology has advanced since and reviews claim that Maxwell has a frontlight technology on par with the Kindle Paperwhite.
3. An HD screen. E-ink technology has also advanced since NookST with Glowlight and Maxwell has a screen from the same generation as the Kindle Paperwhite.

And the biggest reason i am interested in it is the way No-refresh mode is implemented.
Although 6 inch ereaders are not my cup of tea because i read technical books, i am interested in this one. Somebody mentioned android 4.3 coming in near future to ereaders but i doubt that happening soon

You can get a tablet with an LCD screen and these specs for about $70 now. $140 sounds like a pretty high premium for E-Ink.

First of all, it’s the Russian market. Prices are different there. Second – as usual, comparison between LCD and e-ink is meaningless. Very few people buy e-ink because it’s cheaper than LCD (and LCD prices are constantly dropping). Most people are buying e-ink for its features (most notably, reliance on reflected light, sunlight readability and superior battery time). Many people who find these feature important will pay more for them.

The case looks suspiciously like a Nook STR case…

According to the mobileread thread, it doesn’t run the latest version of Coolreader. A rooted Nook and, I believe, a Sony will run it.

The problem with CoolReader and FBReader is not compatibility. They have old (and modified) versions pre-installed on the device (as system applications). This stops new versions from installing. After rooting the device (and it has already been rooted by its first users using good old GingerBreak) one can remove the pre-installed versions and install the new ones.