Borders' warehouses to close by 15 August 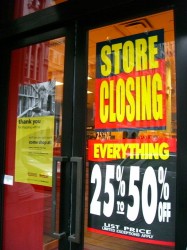 And the staff are working nearly 60 hour weeks to get the stock cleared out.

I’ve just read a comment left in the LiveJournal community iWorkAtBorders. One distribution center worker dropped by let us know that as bad as the retail employees have it, other have it worse.

DCdummy reported that the staff at his DC were working 10 hour shifts 5 days a week with an extra 8 hours tacked on Saturday. What’s worse is that they’re working in metal and concrete box with 100 degree temperatures outside and no air conditioning.

Does anyone know why the warehouses are closing first?

Numilog launches French-language ebookstore in the US