The Icarus Illumina XL HD  is a 7.8″ ereader that runs  Android 4.2 and uses the same sized screen as the Kobo Aura One. It was supposed to ship last month, but hasn’t yet.

Fortunately, we now have a second option. A reader informed me this morning that the Boyue Likebook Plus, the OEM version of this 7.8″ ereader, is now listed on Aliexpress for $199. (Thanks for the tip, Shamik!) 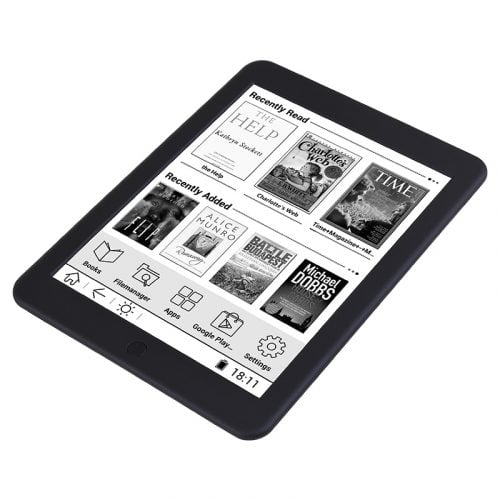 The Likebook Plus has a beautiful frontlit Carta E-ink display with a capacitive touchscreen and a screen resolution of 1872 x 1404. Behind that 300ppi screen is a quad-core 1.5GHz CPU with 1GB RAM and 16GB internal storage.

It also has Wifi, Bluetooth, a headphone jack, and a 2.8Ah battery.

All that impressive hardware is available today at a third the price of the Remarkable.

Which would you get, if you had the funds? 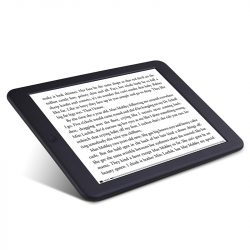 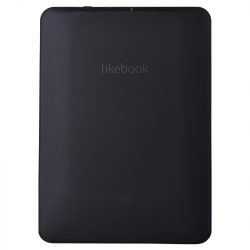 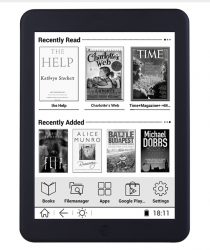 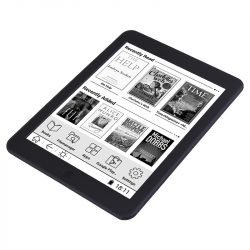 But its software could be a problem, anyone knows its quality?
Aside,cause its size it would be comparable to Aura One ,not RemarKable

The price and pictures look great! The wording leaves me a bit unclear as to whether Play/Books or Kindle software work on the device. Syncing reading position across devices is key for me.

I’m not sure if it ships with Google Play, but you should be able to sideload the Kindle app.

The screen shot you posted in your article shows "Google Play…", 4th icon from the left at the bottom.

I should have looked more carefully. Thanks for pointing that out!

Is its screen plastic based or crystal?

I’ve already pre-ordered the Remarkable and I can’t draw on the Likebook, so…

I decided to order the Boyue Likebook tonight. The order site takes you through the typical stuff, name, address, credit card, etc. I got a successful confirmation for the order.

Then the red flags went up. I got a following email saying my order was canceled for "security reasons". I could appeal and still place the order, but to do that they demand a picture of my driver’s license OR a picture of my passport AND a copy of my entire last bank statement.

Clearly, this is not a legit site. I would strongly suggest folks shy away from it.

So annoying, this sounds great except for the lack of micro sd! This has all hallmarks of being a great step forward in processing power and screen quality, why cripple the storage??

@Eric, I ordered mine with no such problems.

@Grg, there is no microsd slot. But it runs on Android and has a microusb, so is probably compatible with Android-based flash drives. And those currently go up to 256GB: https://www.amazon.com/gp/product/B01MUG1HTO/ref=oh_aui_detailpage_o01_s00?ie=UTF8&psc=1

@Lance, you mean using an external drive as USB On-The-Go?

Previous Boyue devices have been OTG compatible; so unless they downgraded on that particular feature, it seems likely to work.

@Lance, I would say that using USB OTG to fix your need for extra space is a good idea. Not as good as having the duly MicroSD slot in place, but indeed a good idea.

It depends a bit, but I agree that it is a better option for typical users. The OTG option is better, however, for those who require a significant amount of space. Typically phones and e readers only work with sdhc and not sdxc, so the limit is 32gb. You get more space with the OTG drive.

@Lance
Actually, I’ve never had a problem with using e.g. a 64 GB Micro SD card in either my Onyx Boxx T68 nor in the old Nook Simple Touch, even though afaik both claim to only support 32 GB SD card. So until I find a device that actually won’t work with a larger drive, I’ll always prefer a micro SD solution to an OTG one. OTG is fine for moving data, but if I want to use, e.g., the image for a Linux chroot, having it on an OTG drive definitely seems more of a hassle, as you need to make sure not to actually have it fall off while using etc.
I mean, it’s great that the device supports OTG, but I don’t think that reduces the need for micro SD (for my usage, that is).
But looking forward to reviews regardless, of course. If companies start using better processors, it’s hopefully just a matter of (not too much) time until there’ll be a device that ticks all the other boxes (bluetooth, micro SD slot, 8-10 inch size, pen would be nice to have as well)

But anyways, for my Onyx I tend to use a SanDisk connect Wifi drive and that’s always worked well for me. I suppose an SD would work just as well if sdxc is an option, though. I’ll have to give it a shot to test it.

Yes, I’ve also been wondering myself why they advertise these restricted compatibilities. Maybe not all cards are necessarily compatible, so they advertise the largest type they GUARANTEE will work?
Would be interesting to learn to what extent other people have had experiences of larger cards working or not working, maybe I’ve really just been lucky?

The Wifi drive avoids the problem of physical instability of the connection, but I guess it eats up a bit of battery.

Its probably got to do with the restrictions imposed by Microsoft. Microsd cards 64GB and larger(microsdxc) must necessarily come pre-formatted with the proprietary exFAT filesystem for which MS is believed to charge upto $5 per device. If a manufacturer advertises 64GB and higher support, it has to then compulsorily licence exFAT.Unsurprisingly many don’t in order to avoid the licensing fees. The same situation can be seen in many Android devices as well, at least the less expensive ones. Custom kernels,if available,do enable exFAT. One can still use 64GB cards formatted as FAT32 though.

grg I think you nailed it. My Samsung phone claims to support up to 64GB but a little research suggested that the architecture of a 128GB card was identical. I took a shot, invested $45, and now have 128GB storage on my phone, enough for all of my fairly large music collectoin.

[…] about 3 months now the  OEM version of the Icarus Illumina XL HD  Android ereader has been available through AliExpress. Now you can also buy it from Banggood (a significantly more reputable […]