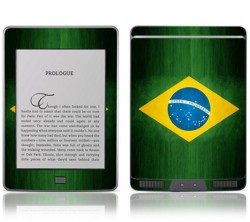 Amazon is on everyone’s mind this week, including mine, but not quite for the reason you expect. The year is drawing to a close, and there’s not much time for the rumors to be true and for Amazon to launch a Brazilian Kindle Store.

That’s why I was particularly interested last week when Revolucao eBook, a Brazilian ebook blog, ran a series of posts on the state of the Portuguese language  ebook market. With the Brazilian Kindle Store rumored to launch next month, I have to wonder what they know that I do not.

In any case, Brazil is seeing explosive growth in ebooks. It’s been just under 6 months since the last time I reported on that market, and in that time the number of available titles grew from 11,000 to 16,000. While still small, that’s an impressive growth that we haven’t seen in the US market since I would guess the Kindle Store opened.

Speaking of which, Amazon is still lagging behind the general Portuguese  language ebook market. They reportedly only offer 6 thousand ebooks in Portuguese  in Brazil, and about 1200 are public domain titles. That’s a slight improvement over when I last checked in April; at that time I could see 4800 titles in Portuguese in the Kindle Store. (The Nook Store, in comparison, is currently showing 2200 titles.)

What’s also interesting is that Revolucao eBook calls attention to the duplicate public domain titles in the Kindle Store. That’s a practice that Amazon officially started discouraging in 2010 and again this year in May. And yet it seems they’re turning a blind eye to the duplicate titles in Portuguese.  I’m not going to speculate as to why, but it is a detail to keep in mind for when the Kindle Store launches in Brazil.

Note also that the increase in selection in the Kindle Store  isnot as good as the local ebookstores, some of which boosted their selection by 40% or more. Clearly they’re anticipating the market taking off.

But as much as the local ebookstores might not like it, the true ignition of the Portuguese language ebook market will likely require Amazon and the media spectacle which will happen around the new Kindle Store. As of spring 2012 70% or more of Brazilians don’t know what an ebook is nor what you’d do with it. After the Kindle Store launches in Brazil, I would expect that number to invert.

Why do so many printer companies have their own smartphone apps?

There is a little more under de hood, most recent books in Brazil don’t have electronic edition available, when they have, price is high, ebooks from the legacy editors cost U$20,00 or more, and don’t have promotions, is common that ebooks cost more than paper books, and this on a country where minimum wage is under U$325,00 and more than 50% of people receive this salary. Brazilian constitution have a special law that forbids government to tax books, in favor of free speech; ebooks are taxed! Government and legacy editors work together to maintain book price high. Amazon is a threat to establishment, or anyone that brings e-readers on affordable price to Brazil.

[…] we haven’t seen in the US market since I would guess the Kindle Store opened.Link to the rest at The Digital ReaderClick to Tweet/Email/Share This Post wpa2a.script_load(); Ebook/Ereader Growth, InternationalNo […]