Budget Priced HP Slate 7 Plus is Shipping Soon in Europe

HP has been interested in budget tablets for nearly a year now, and late last week they announced a new one.

The Slate 7 Plus is a slight update to bottom-of-the-market Slate 7.  It looks to be more or less a clone of last year’s Nexus 7, and it will cost 149 euros when it ships this holiday season.

This tablet is running Android 4.2 on an Nvidia Tegra 3, a quad-core CPU with a clock speed of 1.4GHz as well as a 16-core ULP GeForce GPU. This tablet also has 1GB RAM, 8GB Flash storage, a microSD card slot, Wifi/BT, all packed behind a 7″ 1280 x 800 resolution screen. 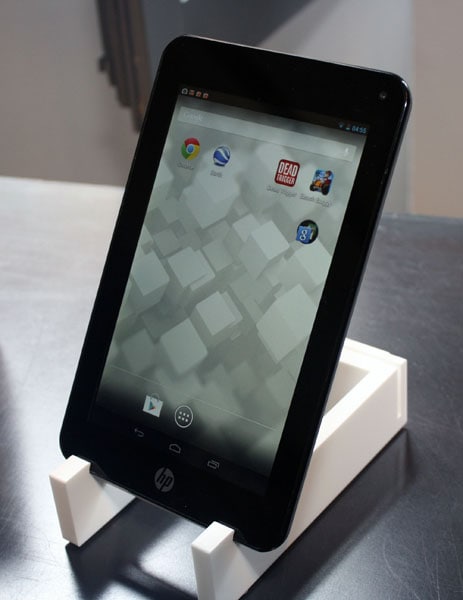 It also has a VGA resolution webcam, a 5MP rear camera, GPS, HDMI out, and it weighs in at a solid 342 grams.

All in all, the specs for this tablet are a solid step up from the HP Slate 7, which was launched in April of this year. That older tablet had a lower resolution screen and was based on a Rockchip RK3066 dual-core CPU.

On the other hand this tablet is also a significant step down from the Slate 7 Extreme, the Tegra Note clone that HP announced about a month ago. That tablet is based on the Tegra 4 chip and has a stylus as well as all around better specs.

The Slate 7 Extreme is rumored to sell for $199/199 euros when it ships later this year, so it might make sense to wait and see if that rumor comes true.

Nook for iOS Gets Accessibility Features as the Android, iOS Apps "Launch" in the UK