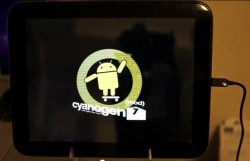 It’s only been just over a week since HP abandoned the TouchPad, and the Cyanogen Mod 7 team are giving us hope that all is not lost. They posted this video yesterday  to show off their progress  in getting CM7 to run on the TouchPad.It doesn’t run very well, but it does run.

This is a very early Alpha release and about all it can do is boot. The touchscreen driver doesn’t even work yet. The long term goal is to set up a multi-boot option so users can have webOS, CM7, and whatever else they want.

As much as I like CM7, I’d much rather see webOS be ported to a different tablet. The perfonrmance of the TouchPad  isn’t all that great, and I’d like to see how well webOS will run on better hardware. If anyone finds a webOS port for the eee Transformer, let me know.

I think you might be underestimating the Touchpad hardware. Performance isn’t that great out of the box, but it can be improved.

From what I’ve read, the CPU is underclocked to 1.2 GHz. "Overclocking" it to 1.5 GHz will give you a boost in speed without compromising stability.

If you install Preware on the Touchpad, then you can apply some patches which speed up the device’s performance. I’ve applied Faster Card Animations Hyper Version, Muffle System Logging, Remove Dropped Packet Logging, and Unthrottle Download Manager. The Touchpad seems to run a lot faster now.

As much as I love WebOS, even the devs will admit that it still needs lots of work to make it run stable. See this reddit by a touchpad employee to gain more insights. One of the things he said was that the webos was somewhat hard coded onto the ARM processor that the touchpad is running on.