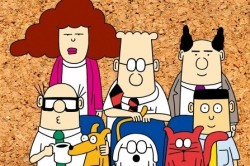 Here’s something I never expected to see when I got into ebooks a decade ago.

A couple press releases have come across my desk this week. It seems that Graphicly and comiXology, 2 of the leading digital comics distributors, are making a major push to sign new comic strips creators. They’ve each announced new partnerships with one or more classic strips.

Graphicly is now distributing over 60 Peanuts collections to the major ebookstores. This deal was announced today, so in the not too distant future you should be able to find Peanuts titles for the Kindle, Nook, Kobo, and iBooks ebookstores.

And earlier this week comiXology announced a similar although much more ambitious deal. They’ve signed Andrews McMeel Publishing and will be distributing a wide variety of comic strip collections, including such popular and well-known strips like Doonesbury and Dilbert. Those two titles are available on launch, but there’s also mention of more titles being added in the future.

AMP also publishes collections for Zits, Pearls Before Swine, Baby Blues, Get Fuzzy, and many other successful strips, so chances are the selection is going  to get very deep and very broad.

The content distributed via comiXology are unfortunately only available via the comiXology apps for iPad, Android, Windows, Kindle Fire, and other devices. The Peanuts collections, on the other hand, is going to be available everywhere (almost). I’m sure most readers have their preferred app or platform, and thanks to Graphicly’s decision earlier this year to shift from selling to distributing the readers will get to choose.

And thanks to the fact that it has competition, the Nook platform is going to have to continue to improve or it will be succeeded by Kindle or iBooks (Amazon is working on this, I bet). And that, my dear, i why I prefer cross-platform content support.

Sony Now Sending Out Emails About the Transition to Kobo

Comixology also has the ability to read comics in a web browser, although it requires Flash. But it is good to hear about these comic strips being added to the mix of stuff out there.

[…] is possible AMP will distribute this digital comic to all ebookstores, in the past they have signed exclusive deals with comiXology. I am afraid they might decide to repeat that past exclusive […]