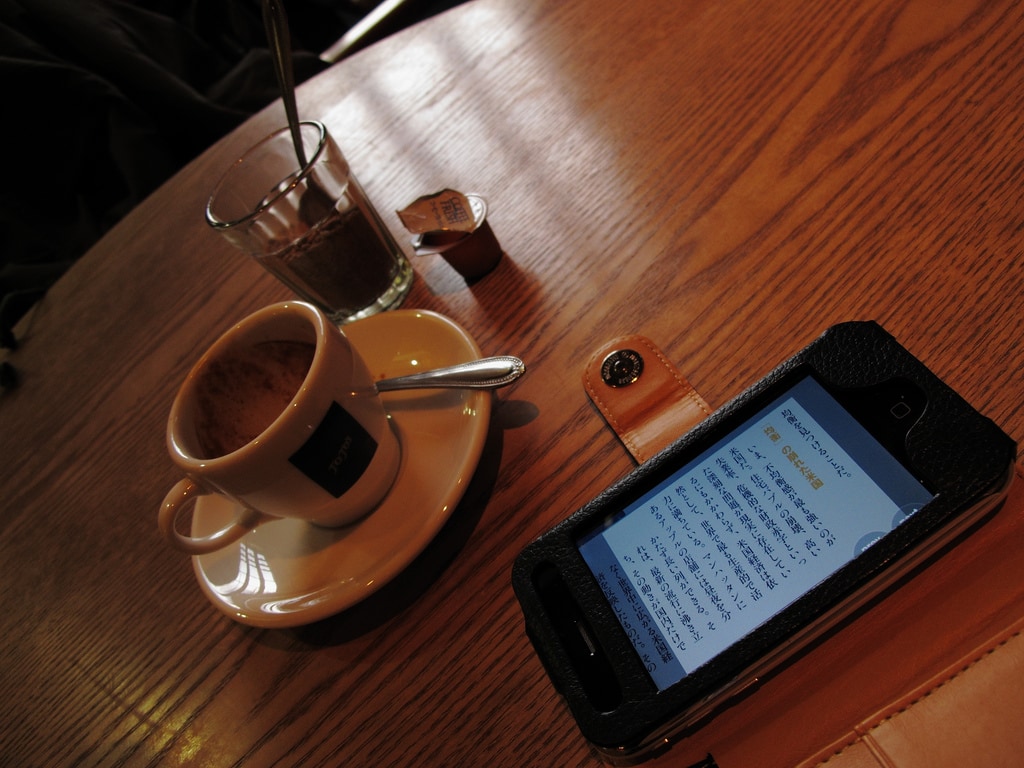 In a country  that invented the idea of cellphone novels, developed the first E-ink ereader, and has gadget-loving consumers who commute long distances everyday, it is a little odd that ebooks didn’t explode in Japan long before the Kindle launched in the US. Have you ever wondered why the Japanese ebook market is lagging behind that of the US?

An article which crossed my desk this morning tries to answer that question. According to The Japan Times, the Japanese ebook market sputtered for many years because of risk-averse consumers:

Although it has now been surpassed by the United States, Japan was once the world’s largest market for e-books, thanks to the early success of the cellphone-content business. But in today’s competitive market, e-book sellers disappear every few months, leaving consumers to wonder whether the digital products they are buying are as permanent as paper books.

I think the article reaches the wrong conclusion, but it’s still worth reading.

It offers a fascinating look at the recent history of failed ebook efforts in Japan, including:

On May 29, Yamada Denki, Japan’s largest chain retailer of electrical appliances, announced that it will close its Yamada e-Book store at the end of July, two years after its launch in June 2012. The service is not especially popular anyway, but the announcement raised the hackles of users by saying that all their purchased e-books would become unavailable; that unused credit would not be refunded; and that Yamada Denki will eventually start another e-book store.

When other e-book stores have shut down in the past, they have usually offered their customers some form of compensation. For example, when convenience-store chain Lawson stopped the e-books part of its Elpaka Books service in February, users were offered Lawson store points to the value of their existing e-book purchases.

In short, the Japanese ebook market has seen so many retailers come and go that the US equivalent would be if Best Buy, Target, Circuit City, Krogers, Menards, Meijers, and even 7-11 thought it would be a great idea to slap their logo on an app and launch an ebookstore.

All that noise and all those competitors would make it hard to choose a single store, and it would also make it difficult for any one retailer to turn a profit, but I don’t think that is the real reason why the Japanese ebook market has been stymied.

While the article in The Japan Times is a good look at the current state of the Japanese ebook market, it doesn’t take a historical view and thus it misses at least one important detail, which is how many titles were offered by the ebookstores. 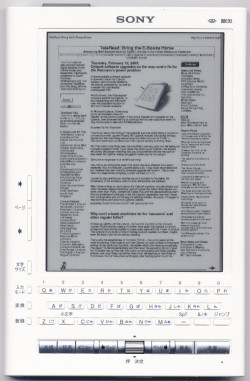 Just to give you two examples, a limited catalog of titles rented for 60 days at high costs helped kill the Sony Librie in 2004. (The high retail price for the Librie didn’t help either, but still …)

And when Sony made their reappearance in the Japanese ebook market in 2010, they launched an ebookstore with only 20,000 titles.

In comparison, Amazon shocked everyone when they launched the Kindle three years earlier and offered a catalog of 90,000 titles.

Content was one of the stumbling blocks for the US market for many years, and the same is true for the Japanese market. If there’s not enough content to buy then consumers won’t invest, retailers can’t turn a profit, and the market fizzles.

And that is probably what kept the Japanese ebook market so small for so many years.

P.S. Content was not the only issue holding back that market, but I would still rate it higher than risk-averse consumers.

Google Books is back on iOS – ebookstore link is gone

The final straw, I think, that broke the back of Sony Librie wasn’t high price, it wasn’t content rented for 60 days, it wasn’t relatively small choice, it was the fact that you were prevented from loading the reader with your own [pirated] content.
Eventually Sony released a tool that let you create your own ebook that the reader could read, but it was too late.

I desperately wanted to buy one of these (after it became possible to load your own content, of couse) but Sony did not sell outside Japan, *AND* the user interface was exclusively in Japanese.

@Name Required: It was actually only about 6 months after debut when they released tools for converting various document formats, as well as "Printer for Librie" that allowed any printable document to be turned into an ebook for the device. I knew a couple of people who bought Librie specifically for carrying around books they scanned themselves. A little market even developed around this where print shops offered scanning services for folks interested in converting anywhere from a few books to whole personal libraries.

@Nate: It’s never or rarely mentioned in English articles about the Librie, and probably is hardly worth mentioning anyway, but for greater historical completeness let it be recorded that discounted rentals were available for customers who joined one of the Timebook Town book clubs. Membership commitments ranged from 3 to 5 books a month at 210yen per book, compared to 315yen each normally, with the larger plan totaling 1050yen monthly. Selection was pretty crummy since aside from the already small number of new releases available for the device each month, customers had to choose a favorite category (genre fiction, literary fiction, English study, business, and a few more) and shop from that. I suppose if a person were a voracious reader of certain kinds of books it may have held some appeal. Members also received a discounted rate on à la carte rentals from the Timebook Library. When all of this failed to take off, to the surprise of no one but Sony and the involved publishers, they tried to force customers into the book club program by raising non-member prices. 315yen went up to 367yen, then to 420yen before the store was retired.

A mess all around, but an interesting experiment nonetheless. If they’d started off with much greater selection and lower prices, I wonder if it could’ve succeeded.

I’m curious how much of a cut pubs got from the rentals. While Timebook Town was doomed to failure the way it was set up, I’m not certain the Scribd and Oyster subscription models are viable either. Given the high payouts they’re offering participating publishers / distributors, they’ll have to attract a lot of people who pay the monthly fee but barely use the services to subsidize the heavy readers.

Incidentally, if anyone wants a piece of e-reading history, there’s one Librie available on Amazon Japan:

There are various proxy buying services you can use if the seller won’t ship internationally.