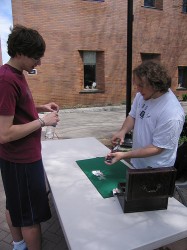 Today DBW debuted a new ebook bestseller list which aggregates the lists from 5 of the 6 larger US ebookstores (Apple is excluded). Each of the lists from Amazon, B&N, Kobo, Google and Sony are tracked on a daily basis. The lists are aggregated into weekly lists which are then weighted based relative market shares of the ebookstores, minimum price for the week, position on each list (positions closest to #1 weighted the most), and so on.

The resulting aggregate list can be viewed based on several price ranges (so the $3 don’t show at the same time as the $10) as well as a single list of the top 25 ebook best sellers. All the lists are available over on DBW.

Now, I love data for its own sake, so I was deeply interested in the new best  seller list. But as I read more about it I began to realize there were some issues. For example, I don’t know what the market share estimates are for the 5 ebookstores, so I don’t know if that aspect was weighted properly. But this is really just an itch I cannot scratch, not a serious issue with the list itself.

But then there’s also the fact that 2 of the 5 ebookstores are global, not US-only, even though this new list is intended to represent the US ebook market. What’s more, Kobo has always boasted about their global reach, so there’s a good chance that there are ebooks sales to readers in Africa, Europe, and South America which are affecting the rankings on this list. While I really have no problem with that, the other 3 ebookstores are the US-only branches of the respective ebookstores.  The data set from each store is not the same, so you really cannot combine them without resolving the issue first.

I’m still waiting to hear back from DBW on the global/local issue, and if I hear back I will edit this post.

But even if DBW resolves the issue about ebook sales from outside the US, they’re not going to be able to much about the source of the data. You see, DBW pulls information from the official best seller lists offered by each ebookstore. How do you know that data is reliable?

I’m not going to impugn the accuracy of the best seller lists for any of the other ebookstores besides Amazon; I have no evidence that they’ve pulled any shenanigans.

But Amazon is a completely different case. You cannot trust Amazon’s bestseller list because we know they’ve pulled shenanigans before – and it has happened more than once.

Back in March of this year I posted on the then current sleight of hand Amazon was pulling with their Kindle best seller list. This was back when Fifty Shades was still not quite legitimate, but after it had already become a bestseller – everywhere but Amazon. The thing is, Amazon was filtering that trilogy out of their most visible best seller list. In fact, there was a time where you could open 2 difference bestseller lists for the Kindle Store and find different data.

There was a simply and obvious reason for Amazon to filter the ebook: it’s erotica.

I’m not sure whether someone at Amazon is a prude or if they’re afraid of offending their customers with objectionable content, but I do know that Amazon has in the past manipulated their lists and search results to hide less mainstream genres like erotica and gay romance. Here’s one publisher’s account from 2009:

On Amazon.com two days ago, mysteriously, the sales rankings disappeared from two newly-released high profile gay romance books: "Transgressions" by Erastes and "False Colors" by Alex Beecroft. Everybody was perplexed. Was it a glitch of some sort? The very next day HUNDREDS of gay and lesbian books simultaneously lost their sales rankings, including my book "The Filly.

If you’re interested, here’s another account from that incident in 2009. Or you could read the explanation which Amazon gave back in 2009:

In consideration of our entire customer base, we exclude "adult" material from appearing in some searches and best seller lists. Since these lists are generated using sales ranks, adult materials must also be excluded from that feature.

Folks, Amazon accounts for at least half of the US ebook market, and as I have shown above their lists cannot be trusted.  (And I haven’t even mentioned the several times Amazon has tried to expel gay manga from the Kindle Store.)  Do you really want to rely on numbers from a company that is patently unreliable?

How do you know they’re not filtering the best seller list right now?

I don’t know, and more importantly neither does DBW.  I did inquire before writing this posts and I was told that

Re the booksellers playing with the lists, we will be relying on them not to, but if they do, the kind of discoverability that would cause could make the ranking a self-fulfilling prophecy. We’ll watch that closely

You can take that for what you will.

image by The Eggplant

Streetlib Now Distributes to Kobo Plus

[…] The Digital Reader raises some interesting questions. They claim as fact that 2 of 5 e-book stores are global – even though this new list is intended to represent the US e-book market. The other 3 e-book stores are the US-only branches of the respective e-book stores. If 2 of the 5 stores are including global sales data and the other 3 are pulling US sales data – that’s a problem. […]