Naomi Baron would have you believe that digital natives prefer reading in print, but a recent survey of college students adds a huge caveat to that claim.

The University of Florida recently posted the results of a survey of 18-24 year-olds. The survey asked readers of the site Elite Daily to identify their preferred news sources, and the respondents overwhelmingly chose digital over print. 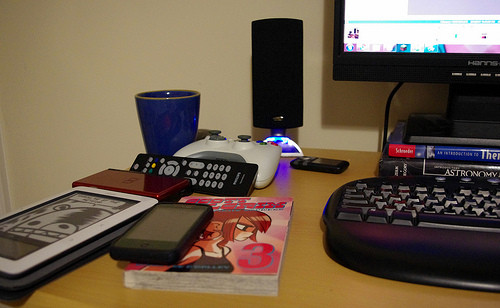 Print media came in a distant 6th place, with 3.1% of respondents listing it as their primary news source.

So does this mean Baron is wrong?

I’d like to say she is, but the answer is murky. For one thing, this survey is less than scientific, but more importantly a later section of the survey asked whether the respondents felt they were well informed by their primary news source:

While the survey argues against Baron’s argument that digital natives prefer to read on paper, it does lend support for some of the anecdotal reports about why some are sticking with dead tree pulp.

Those that stick with paper feel better informed when they read physical media. "Even though the overwhelming majority of young adults are turning to digital sources for news, there is still a perception by some that they are better informed through traditional media,"  said Diane McFarlin, dean of the UF College of Journalism and Communications.

That doesn’t necessarily mean that they are better informed (answering this would require a different survey), just that they feel that way.

Every other survey I have seen about college students asked about digital versus print textbooks. They mostly liked print textbooks better. But I can see where they could prefer one format for class work/studying and a different one for reading news and even entertainment. Why not?

As a rule, I ignore surveys on college textbook preferences. The single overriding factor in why students choose paper over digital is that the students need to resell the textbooks, and most surveys miss this point.

The pocketbook rules that market, not preferences.

Naomi found this drum and has been beating it anywhere she can for a few years now. The fundimental "research" is aging and doesn’t contain numbers that really bear out her conclusions.

I’ve read parts of her book, and that’s the impression I got, yes.

[…] them electronically. Some responses to this finding have pointed out that this preference have more to do with resale value than with media […]

[…] The only way that you can conclude that digital natives, for example, prefer to read on paper is to ignore the fact that those same digital natives are getting their news on the web. […]