This is Cloudary’s second round of financing (at a minimum); the first was in May 2012 when Orbis bought 2% stake in the firm for $15 million. That earlier deal valued Cloudary at around $800 million, while the new investment from Goldman Sachs and Temasek lowered that value to around $600 million.

Cloudary, which according to its website is also known as Shanda Literature, operates 6 online writing and reading communities (Qidian.com, Readnovel.com, Hongxiu.com, Xs8.cn, Xxsy.net, and Rongshuxia.com) covering a variety of genres including mystery, fantasy, wuxia (Wikipedia: a martial arts thriller genre native to China), science fiction, and romance. At last count (in early 2012) the communities had an aggregate membership count of 1.6 million members with 6 million titles uploaded.

That membership count came from an SEC filing related to the Orbis investment in May 2012, so it is a little out of date.

Cloudary also provides a number of digital publishing services, both on and offline, including licensing and distribution; it also operates an ebookstore. This company was originally founded in 2007, but several of its communities predate the company and were later acquired by Cloudary. 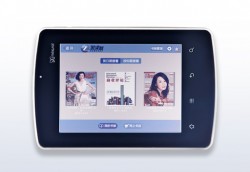 On a related note, the name Shanda might ring some bells. One of Cloudary’s sister companies (Shanghai Nutshell) has been making Bambook ereaders for some years now, with the first model of the Bambook ereader having been released in August 2010. Shanda has also released a smartphone in 2012, and is working on a smartwatch.

Shanda also briefly hung the Bambook brand on one of Qualcomm’s failed Mirasol ereaders, calling it the Bambook Sunflower. That device showed up at CES 2012 and was briefly on the market until Qualcomm stopped production of Mirasol screens in mid 2012.

[…] Cloudary, a website dedicated to contemporary Chinese literature, is a great illustration of how fiscally rewarding online content can be. […]

[…] of the largest digital publishing websites is run by Cloudary, a website dedicated to contemporary Chinese literature. They provide a wide range of digital services, such as online eBook delivery and they also manage […]