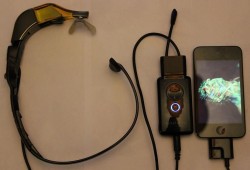 Google isn’t planning to release their heads-up display until later this year, but if you can’t wait then you might want to check out a new Instructable that was posted a few days ago.

One hardware hacker has taken a pair of Myvu video goggles, cut them in half, and wired one half into his iPhone. The resulting device is a functional but not very pretty homemade Google Glass.

This is not a simple project, but the hacker has documented most of the steps. To start you’ll need to find one of Myvu’s video goggles. This company went under in 2010, so the supply is both limited and expensive. For example, the video googles that are shown above cost $280 on Amazon.

You’ll also need to get a gaming headset, have a cutting tool on hand, and have some experience with splicing wires. Unlike the Google Glass, this DIY alternative is a strictly wired project. But on the upside at least this way you won’t have to worry about battery life.

I have to say I find this fascinating. The resulting device is expensive and not terribly pretty, but it is also sounds like it is more capable than Google Glass (as well as cheaper).  The eyepiece used above offers a 640×480 screen resolution and appears to act as a second screen for the hacker’s iPhone.

What do you think of it?

IMO it’s not worth the money. All it does is save you the effort of pulling your smartphone out of your pocket. Is that really worth $300, much less the $1500 that Google is now charging developers for early Google Glass sales?

How to Open a New Book: Infographic

Here’s What’s Inside an SD Card