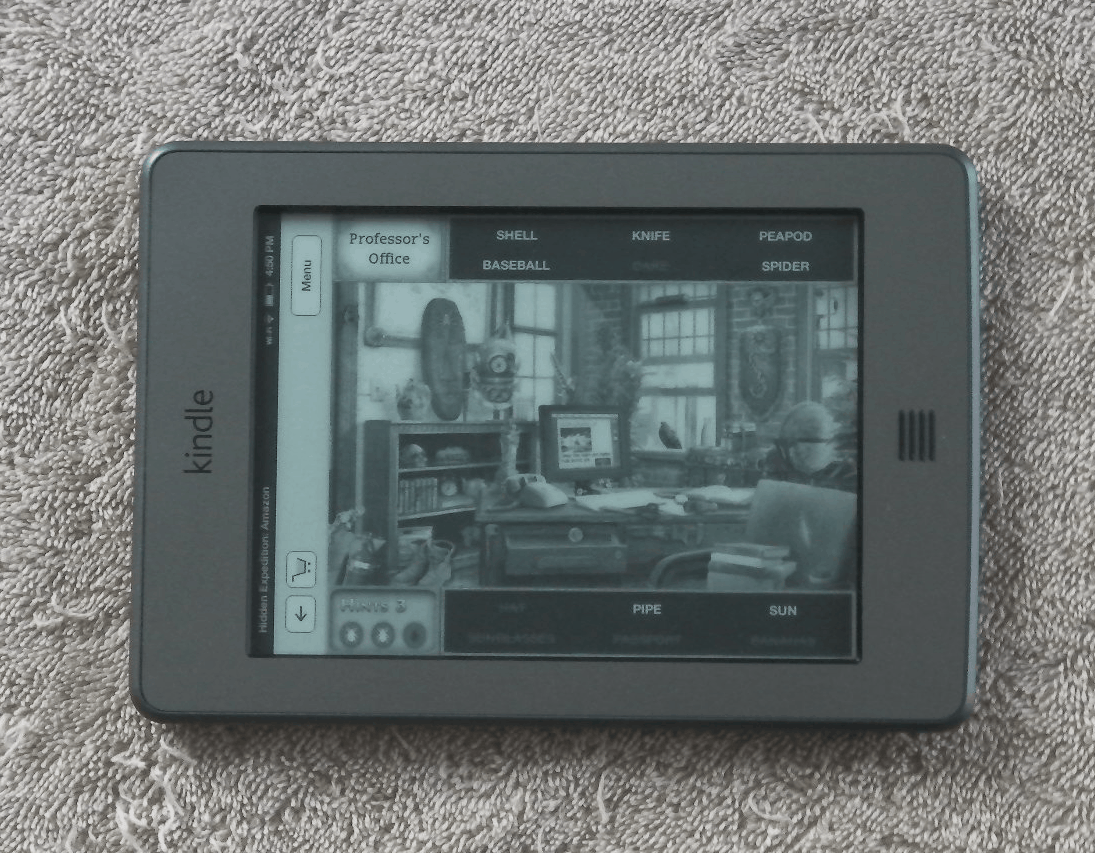 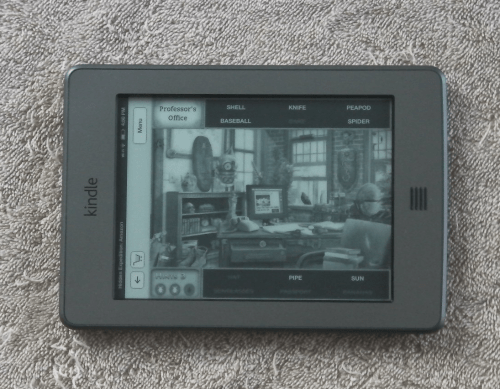 a Kindle Touch displaying a "find it" type of game

Yesterday’s bizarre price osculations on the Kindle Voyage and Kindle Paperwhite got me thinking about older Kindle models, and what they used to be able to do.

Tell me, do you know what Kindle Active Content was?

This was the name Amazon gave to a category of apps, games, puzzles, and word games like Scrabble that we used to be able to run on the Kindle.

The first few titles in this category were released in 2010, and new titles were added every so often by Amazon and third-party developers, and Amazon even had about 20 free titles you could install for free.

The apps varied from complex apps such as the choose your own adventure type of book like Dusk World (or Coliloquy’s apps) to simple games like dots and boxes. There was a wide variety that included crosswords, utilities, and even a test prep apps.

This renaissance lasted until 2014, when Amazon released the Kindle Voyage. This was the first new Kindle model to not support Kindle Active Content. Subsequent models also lacked support, and while you can in fact still install some of the existing Kindle Active Content listed in the Kindle Store, the program is effectively dead.

I can’t say I miss it because Amazon never really made it convenient to switch between an app and the ebook I was reading; unlike smartphones, the Kindle always took nearly a minute to close one and open the other.

But it was still nice on long flights to pull out a Kindle and challenge my seatmate to a game of tic-tac-toe.

For those of you who used to have older Kindle, do you miss having games and word apps on your Kindle?

Did anyone keep an older Kindle model just for the games?

I’m releasing my photos under a CC license

The one and only thing I miss would be an Interactive Fiction interpreter – but that’s still available, although it requires a JB. Plus, I’ve got ZMPP on my Fire, which is good enough.

So, no, not really. It seems like these days "active content" equals "apps" equals tablets. For me, anything on an e-reader that distracts from reading (or does not enhance reading) is superflous. I don’t even use the Goodreads integration on my PW – that’s for my smartphone to tinker with.

Other than the fact that I can sit and read in bright sunshine with as many books on my Kindle as on my shelves at home my favourite thing about my Paperwhite is the fact that it cannot distract me by playing games, surfing the web, etc. The dictionary and wiki features I do use, very infrequently, mostly when I want to elucidate a current American cultural reference which I’m too old to understand.

still have a kindle keyboard that my girlfriend reads on from time to time. used to play scrabble on it years ago, but no longer. the newer version for the fire tablet is much more sophisticated and easier to use. in addition, one can play scrabble in foreign languages.

No. The experience of "active content" is so sub-par to what you get with a smartphone that I never used it after one time.

The choice your own adventure type content is cute but it isn’t popular.

I still use a Kindle Touch that requires me to sideload all my books, even those from Amazon.

I never knew these games existed. I don’t know if my Kindle carries them, and I’m not interested in finding out.

As always, the "I just want to READ!" faction is the most vocal… 😉

Personally, I was lured to the Kindle ecosystem after becoming an Amazon Prime subscriber (and accepting that B&N would never add directory support to my beloved Nook). I loathe devices lacking expandable local storage but compromised on a Kindle Touch since it at least has a headphone jack, MP3 player and TTS with an 800x600x16 greyscale eink screen.

My firmware version 5.3.7.3 is still functionally integrated with the Kindle Store, even if the internal 4GB holds only 511 books (not 3000 as promised) plus 1879 in the cloud.

And yes, I have Active Content: 7 Dragons Calendar, Notepad and KJV Bible. They all still work in the 28MB storage remaining! Being able to add rudimentary PDA capability was important to me – and *hundreds* of other people!

Of course, David, back in the day, when the first Kindle hit the market, when the iPhone still hadn’t realized its potential, and the iPad was still a long way away, there where hundreds, nay, thousands of people keen on extracting more functionality from their Kindles. Thus the active Kindle hacking scene, jailbreaks, etc., etc. It wasn’t only XKCD that saw something akin to the Hitchikers' Guide to the Galaxy in this strange new device:

It’s just that technology evolves, and the current crop of e-readers are in a different niche altogether – they are seen as single-purpose, "boring", distraction-free devices for long-form reading.

That doesn’t mean there’s anything wrong with your Kindle Touch – and all your apps and Active Content. Heck, I wish we could get a plain-Jane, simple 3.5″ mini-jack on these things instead of BT, but hey, I’m not getting any younger.

I used to have quite a few of those Kindle Active Content games on my older Kindles. My favorite was Sudoku. I thought that one was better than any of the sudoku apps I had on my iPad. I did keep an older Kindle around for a ehile, but eventually I got tired of having an extra unipurpose device hanging around so I sold it. Wish Amazon would bring that feature back!

"Single-purpose, 'boring', distraction-free devices for long-form reading" equates to content delivery platforms for walled gardens which serve the interests of the vendors. Not a bad start, but why does it have to be incompatible with multifunction content creation for those who want alternative functionality?

I want Apple to open-source the Newton OS on an updated eink MessagePad 2020. Or a Nook Plus with interactive OLED panel under epaper display. But I’d settle for a 300dpi 8″ 4:3 aspect ratio eink reader with 8GB RAM & 32GB internal with microSD slot expansion to 256GB designed so a pair can be hinged together comprising a dual-screen reader with solar charger case…

Amazing people are still interested in these and also use as a teenager.

I loved it. I used it when I got daily headaches and looking at a screen was tough.

The only one I really miss is the Slingo game. It wasn’t as good as the PC Slingo game I eventually got, but I liked it more than most of the flashier iPad versions. So many current versions of games exist only to lure me into buying coins and rubies. The Active Content games we’re real games.

I might have enjoyed more games if I’d had the Kindle keyboard. 🙂

Wow, am I the only one who misses a calculator and something to convert measures? Have an old Sony Prs-T1 jailbroken and a calculator was the first app I installed. Not really useable anymore with the low resolution and no front-light, also the page-turn-buttons often skip a page (not sure wether it is dust/hardware-error or the jailbreak).

Often I use the apps on my iPhone for that, but I tend to read in bed, most times I do not want an iPhone laying around, it is too distracting from reading, even with do-not-disturb turned on.