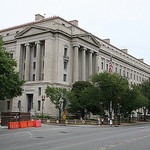 Blaise Pascal famously wrote, “The letter I have written today is longer than usual because I lacked the time to make it shorter.” Hopefully Royalty Share CEO Bob Kohn has plenty of time. The judge tasked with considering the Department of Justice’s proposed agency pricing price-fixing settlement for three of the Big Six and Agency Five publishers has told him he can submit an amicus brief spelling out his arguments opposing the settlement.

But rather than the 25-page monstrosity (PDF) he filed earlier this month, he has to cut it down to five pages, the same as everybody else is allowed. She permitted the five-page amicus brief (PDF) filed by the Authors Guild on August 15th to be filed unchanged. I guess you can’t blame a guy for trying.

The more legal maneuvering that takes place around this settlement, the more curious I become to see whether the judge really will rubber-stamp it or will send it back to the drawing board. Will she be impressed more by the DoJ’s legal arguments that entities who benefit from the status quo don’t merit consideration in matters of anti-trust? Or will she listen to those who insist that Amazon is the real villain and shouldn’t be allowed to connive its way to a monopoly?

Meanwhile, an article in yesterday’s Morning Coffee, taken from a stock trading newsletter, intrigues me. The author, Peter Larson—who admits that he’s investing in Barnes & Noble and short-selling Amazon—finds it very interesting that one party who has been curiously silent in the whole matter is Amazon itself. It filed no comments in the public comment period, nor has it filed any amicus briefs with the court. It seems to be content to let itself be talked about and argued over, without once speaking up to defend itself.

Larson proposes two possible reasons for Amazon’s silence—either it believes the settlement will be thrown out with or without its intervention, or Amazon is doing well enough with its Kindle sales now that it has no need for the sort of dramatic price cuts it did when the device was first introduced, and indeed now that the Kindle is (rumored to be) sold at a loss it no longer actually wants them. (Or both could be true.)

Whether those are true or Amazon has some other reason for its silence, I’m certainly willing to believe there is one. Jeff Bezos is known for his clever scheming, and Amazon never seems to do anything without a reason. It still remains to be seen what it is, and just how all this is going to play out.

I wonder if there isn’t another reason for Amazon’s silence, and that’s that it’s so busy doing its job, and so dedicated to providing the greatest reading experience it possibly can to its readers, that it simply has no time for this sort of distraction. I know from experience that when you’re fully invested in and dedicated to something you care a lot about and want to make as excellent as it can possibly be, a lot of the noise of debates and et cetera tends to fall away. One can go online and follow the rumblings and contribute to the discussion and debate arguments endlessly, or one can do one’s job well. I mean, they’re not mutually exclusive, but there might be something there.

One thing I think this is all revealing is who’s loyal to whom (if not why). It’s plain, for example, that the Authors Guild doesn’t care about writers or readers.

I’m pretty sure the lawyers Amazon keeps on retainer don’t have anything to do with "providing the greatest reading experience it possibly can".

I don’t see why any Amazon lawyers would be involved in the matter, as Amazon is not one of the parties in the suit, only mentioned within its context. Which is all the further reason to completely ignore it and let their PR arm concentrate on the things that matter, like new Prime partnerships, new tablets and e-readers, and new cloud services.

If this guy’s investment advice is as good as his legal knowledge, I hope is has a large supply of extra shirts 🙂

I tend to think Amazon hasn’t formally replied because they possibly just don’t care. The Agency scheme hasn’t exactly crushed their success. I’ve always kind of felt that the collusion was unnecessary and it won’t be a particularly effective long term strategy anyway. There’s also the "don’t poke a snake" school of thought. Look at the grief Amazon caught when the suit was first filed, with some even suggesting they were the driving force behind it. Of course, we found our later that Amazon was talking to the DOJ because they, themselves were being investigated as part of the process. Filing official documents in support of the suit or any settlement could just bring the conspiracy theorists back out of the woodwork. If I was Amazon, I’d probably stay out of it to and just keep going about my business. Besides, a point the anti settlement folks still don’t seem to get when they launch in Amazon hating defenses is that even if you believe they were acting illegally (I don’t) that doesn’t give publishers and Apple free reign to do something illegal in response.

Amazon is getting what they want (freedom to set prices) without any effort, so you could be right. Any response now would only fuel the conspiracy theorists.

I agree, I can see no reason why Amazon would have anything to say. What is there to gain by cheerleading the DoJ? From CNN.com on 4/25: "…[Amazon] called the legal action 'a big win for Kindle owners.' The book giant also said it looked forward to lowering prices on more Kindle titles, as a result of settlement deals…" That made their position clear. They don’t need to say anything more. They will be fine whether the case succeeds or flops.

If the author of the piece wants to consult the Magic 8-Ball about someone’s silence, why isn’t he conjecturing about the publisher’s silence on an interesting point in the lawsuit? The "$9.99 is a loss-leader" CW isn’t true, according to the DoJ. They stated in the original document that "At that time, Publisher Defendants routinely wholesaled those e-books for about that same [$9.99] price, which typically was less than the wholesale price of the hardcover versions of the same titles, reflecting publisher cost savings associated with the electronic format." If that was false, the publishers would certainly know that. Why aren’t they screaming about it? Seems like that would be a good point to include in any amicus brief. Of course, if it’s a true statement, they would avoid it.

My blog has been misplacing comments lately. Sorry.

[…] a picture is really worth a thousand words, Bob Kohn may have found a clever way to get around Judge Cote’s insistence that he get only the same five pages for an amicus brief that everyone else does. He has submitted his brief in the form of a five-page […]