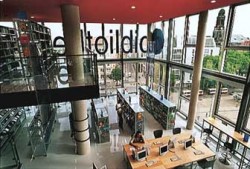 The major US publishers are notably averse to library ebooks, so today’s news is probably making them dyspeptic.

The Dresden Municipal Libraries announced this morning that they were expanding their digital library program. Starting today, any resident of Germany can now register online for a library card and check out ebooks, music, and video.

Reading the ebooks require Adobe DE, a compatible ereader, or the Onleihe apps for Android, iPad, or iPhone, while the music and video have to be played in Windows Media Player.

This isn’t the first program of its kind, though it is probably the most open. I know that several public libraries here in the US, including the NYPL, let non-residents get library cards. An NYPL card, for example, is free to anyone who lives in or pays income tax to the state of New York. I was also under the impression that those outside the state could also get a card, but that doesn’t seem to be the case. And while the NYPL offer is cheaper it is also limited to a smaller population. The state of New York has around 20 million residents, while Germany’s population is around 82 million.

There are also similar commercial programs in a number of countries, including Mofibo and RiidrOne in Denmark,  Madrid-based 24Symbols (Spanish language focus but with some English language ebooks), various niche services like Safari Online, and of course the Kindle Owners Lending Library.

It’s a bit funny to talk about the "major US publishers" averse to library book sales in Germany considering half of the worlds largest publishers are, in fact, German based conglomerates (ie Random House, Penguin, Macmillan); Hachette (formerly Warner Books) is based in France; and that leaves just Simon and Shuster (CBS) and HarperCollins (Newscorp) with operations based in the US.

In any case, I’d suspect that library sales and distribution would be a terrific kick-start to the ebook business in Germany where sales have been tiny — by US standards. Not to mention most of the titles will circulating in the German language (and no doubt other major European languages); so it’s only a threat to paranoid English-language publishers. And, yes, that could include Mr Murdoch.