A reader has just pointed me at a press release that E-ink released yesterday. It seems that Sony’s new 13.3″ writing slate (the one with the flexible screen) is using a screen made by E-ink.

They’re calling the new screen tech Mobius. Instead of the glass panel used in many ereaders today, the Mobius screen uses a plastic backplane that is flexible and as a result is more resistant to impact.

This is a screen tech that Sony has been developing for some years, and now E-ink is going to make it. E-ink has the 13.3″ size in production now, and they are also looking at using the Mobius tech to make other ereaders and signage.

Update: E-ink says that they can offer a higher resolution screen, but Sony didn’t want to make it. 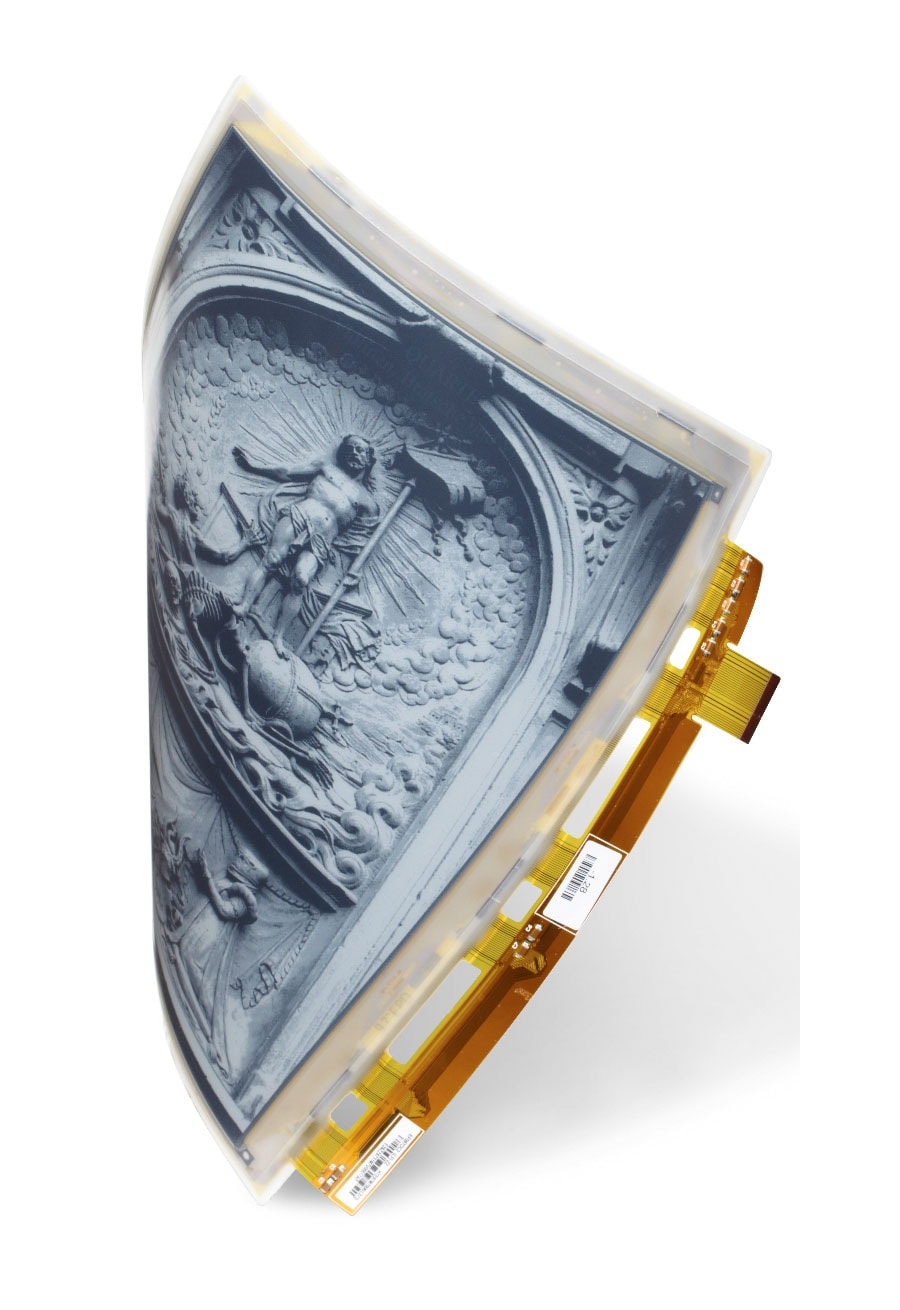 Sony’s writing slate has a display resolution of 1200×1600, or about 150 ppi (pixels per inch). That is a higher pixel density than the screen on the laptop I am using at the moment, but it is also far less dense than the crispness that we have come to expect on mobile devices – even E-ink devices.

The Kindle Paperwhite, for example, comes in at 212 ppi, while the Kobo Aura sets the new standard at 300 ppi. And even the older ereaders like the Nook Glow have a screen with 166 ppi. 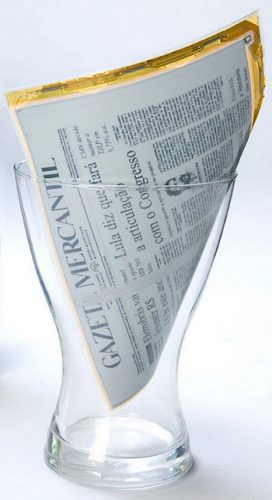 I think that most of the leading consumer gadget makers will look at the Mobius tech and pass on using it on smaller screens because they will choose higher resolution over ruggedness. But the tech might show up on rugged devices like sports, construction, and military equipment – markets where durability is valued more than screen resolution.

But even if it’s not the sharpest screen on the market, 150 ppi is nothing to sneeze at. That is the same pixel density that PlasticLogic achieved with their flexible epaper display. PlasticLogic never had much luck getting their screen onto tablet/slate/ereaders, but they did almost release the Que, a 10.7″ slate. And PlasticLogic has also made a limited number of educational slates in Russia.

150 ppi is also better than what Polymer Vision was able to produce. This dearly departed company had released a cellphone with a 5″ foldable E-ink screen. It was called the Readius, and it had a screen resolution of 320×240 when it briefly hit the market in 2008. Due to financial problems Polymer Vision was never able to produce a second model, so it’s not clear what screen resolution they managed to achieve.

P.S. My source just reminded me that LG developed a flexible 6″ screen that had a resolution of 1024×768. But that screen does not appear to have had much market success. I know of only one ereader that used it (Wexler FlexOne) ever hitting the market, and of course there is the Earl Android tablet (not yet on the market). So perhaps there are production issues with high resolution flexible screens, but unfortunately that is not the kind of question that anyone will answer.

Thanks, commenter known only as Name! 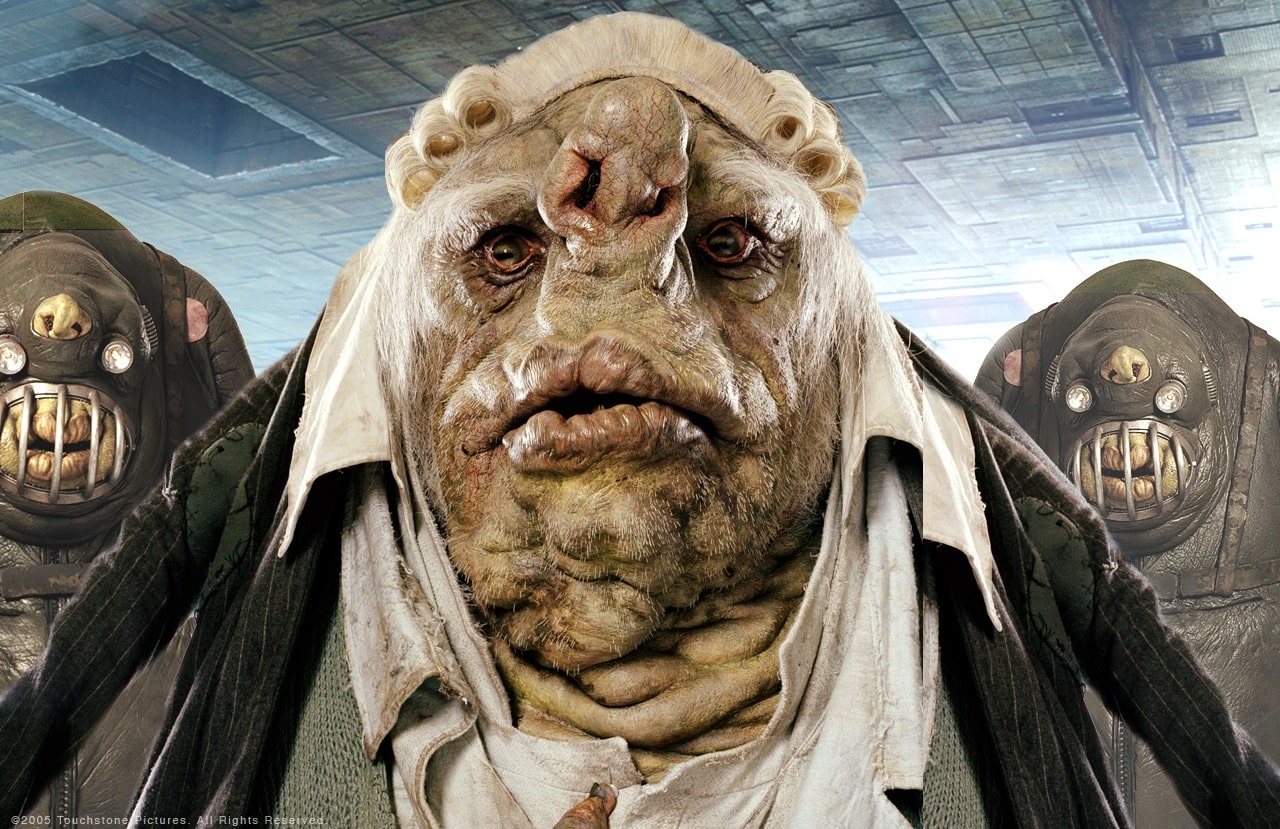 European Commission Proposes that eBooks be Sold with Reduced VAT

And the Dropbox debacle continues

You’re welcome! If not Sony, there might be other companies who achieve higher pixel densities with flexible screens. If you go back to the recent announcement of the Earl, they claim on their website, that the device will also use "flexible E-ink screen", but "designed by LG" and with 1024×768 pixels.

I wonder if LG is having production issues? That could explain why everyone else stopped at 150 ppi.

Even at 150 dpi an 8in+ reader would work provided the price was low enough (<$200) and the weight is low enough (~250g). There is room in the market for a large format reader for seniors.
Of the two, I think price is going to be the hard part as the volume is going to be low.

Now that you mention it, the Trekstor Pyrus Maxi has an 8″ screen that comes to 160 ppi. Mobius could be a good alternative, if not for the cost.

Digma s605f and Gmini MagicBook M6FHD ereaders also utilise the LG E-Ink 1024×768 Flex display. So it comes to a total of 3 devices excluding the not-yet-released Earl.

Thanks. I wonder how many were sold?

No idea. But they are sold widely in Russian retail stores. I’ve seen them in many places even in my provincial town.

[…] DPT -S1 is equipped with an entirely new E-ink screen. The Mobius screen tech is the result of 3 plus years of screen tech research by Sony which resulted in a plastic-backed […]

[…] has also launched Mobius, a flexible epaper screen tech, and Carta, their 4th generation screen. The mobius screen is […]

[…] 13.3″ writing slate is expected to hit the market with a flexible plastic screen and thousand dollar price tag, putting it out of the reach of most consumers (and even a lot of […]

I Seriously Doubt that the next Kindle Paperwhite will have a High-Res Flexible E-ink Screen – The Digital Reader April 17, 2014 um 6:41 am

[…] Kindle Paperwhite 3 will be using screen technology that was developed by e Ink and Sony called Mobius. Mobius uses a TFT technology that will enable the development of much lighter and rugged products. […]

[…] According to my sources, E-ink doesn’t have that higher resolution screen under development, much less production. My source told me in March that the next Kindle Paperwhite would have a new screen, but that screen would not have a resolution higher than the existing screen. Instead, the new KPW will have a more flexible and rugged screen based on the Mobius screen tech which launched last year. […]

I’ve had two broken screens already. I even warned a friend about this problem, but he still managed to be careless and break his within 3 months. I realized that I hadn’t even stepped on the screen. It was the torquing of the kindle body that cracked it. The stupid thing was resetting (another problem!) and I just slightly torqued it with my hands (one at the top, one at the base ) just out of frustration–but far from extreme–and it cracked. Of course, the crack wasn’t visible on the front-side, so it took some mental backtracking to remember what the heck had happened most likely. After pulling the screen out I investigated just how flexible it was. The results were pathetic. Just slightly torque it, and it cracks.

After two broken screens, I’m not buying another until a technology like this is available. Think of the weight they could save by using this screen. The main motivation for the rigid metal frame is to prevent the flexing of the current screen.

[…] the past few years E-ink's signage offerings were limited to either a 13" or smaller flexible Mobius E-ink screen, or a 32" and up inflexible […]

Gajah Unveils the InkCase Plus – Adds an E-ink Screen to Nearly Any Smartphone | The Digital Reader September 28, 2016 um 3:42 pm

[…] InkCase Plus is the second consumer product to use E-ink's new flexible screen tech, which was unveiled last Spring. It's far smaller than Sony's 13.3" E-ink writing slate and it also boasts a sharper screen […]