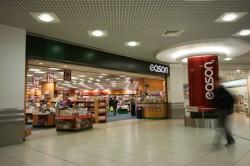 There’s news this week that some booksellers are going over to the dark side, but there’s also one Irish bookseller that is not. Earlier today Eason, a chain of 40 corporate and franchise bookstores, announced plans to release their own ereader.

Details are still scarce on the price, release date, specs, or even the color of the device, but an Eason spokesman did give some idea as to their plans. "We are not getting into bed with Amazon, that is for certain," he said.

Eason has been working for some time now to add ereaders to their stores. Last November they completed a remodel of 25 stores which added both new ereader stock as well as a petting zoo where customers could try before they buy. And that’s not all they’re doing. "As part of a €20m plan to modernise our entire chain, we will be providing live wi-fi in our stores from this summer and dedicated e-book areas which will permit customers to download e-books from our website. The next phase of this process is to launch our own Eason branded ereader."

And when they do, Eason will have a lock on the market. Ireland has a population of 4.4 million, making it an ebook market which is too small to draw the interest of any of the major ebookstores.

Authors, Don’t Be Taken in by the Blockchain/Bitcoin Hype

>>>making it an ebook market which is too small to draw the interest of any of the major ebookstores.

Kobo has been there:
http://mikecanex.wordpress.com/2010/12/20/kobo-books-the-countries-they-sell-in/

Do they have a local store there? No.

[…] were remodeled at that time, and I am told that more have been switched over since then. Eason also dabbled with the idea of releasing their own branded ereader last year, but I do not know if that ever […]