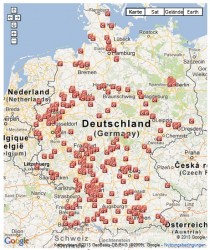 eBook gift cards aren’t having much visible success here in the US, with Livrada shifting towards selling to authors and publishers instead of consumers, bu in Germany they are quite popular.

eBookCards announced earlier this week that their 7-month-old service has expanded to support over 300 retail stores in Germany. The image at right shows a map of the participating stores (more details here).

The service is also gaining popularity among publishers, with more than 40 publishing houses now distributing titles in the program.The selection of titles has also grown to over 150, including most recently works from Carlsen, Piper, and Ullstein.

The ebooks sold by eBookCards include titles protected by Adobe DRM as well as digital watermarks. There are also a number of titles that are sold with no copy protection at all.

In addition to the 150 titles available as cards, eBookCards has also found a way to expand a retail store’s selection of cards to include 250,000 ebook titles. It’s called a Joker card, and stores can use one of these cards to offer a customer the specific title that they request. Options are limited to only ebooks distributed by Epidu, one of the partners in eBookCards, but at 250,000 cards this is still a larger selection than your average bookstore.

Zola Books is All Hat and No Cattle

[…] abrupt and no further explanation was offered outside of a short note from CEO Curt Matthews.   Ebook Gift Cards Taking Off in Germany (The Digital Reader) eBookCards, a seven-month-old service, is now in 300 German stores and has about 150 titles from 40 […]