Ematic is back in my inbox again today with a new 10″ tablet (yes, another one).

The Genesis Prime XL is a new(ish) dual-core Android tablet which is selling for $125 on Amazon, Walmart, and other websites. It ships with a rather low resolution screen, a plethora of ports, and a low resolution front-facing camera. 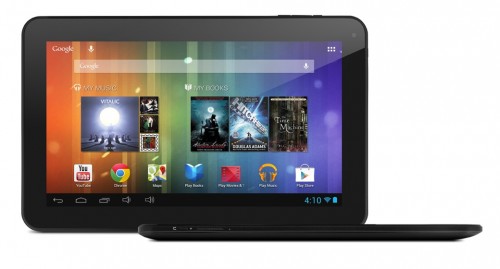 This tablet is equipped with a dual-core 1.1GHz CPU, 512MB RAM, 4GB Flash storage, a microSD card slot, and Wifi. It has a single VGA webcam, speaker/mike, HDMI port, g-sensor, accelerometer, and an audio jack.

The screen resolution is 1024 x 600, or about what you could get on the original Kindle Fire. And like most budget tablets these day the Genesis Prime XL ships with Google Play, and it also comes with 5GB of cloud storage.

According to Walmart this tablet is available in a handful of colors, but I wouldn’t recommend that you get any of them. In fact I would avoid this tablet completely. Early reviews on the Walmart website have pointed out numerous flaws, including that users only have 1GB of storage, battery life is under 3 hours, and that the pink shell bleeds ink. Also, the pre-installed Google apps take up most of the 1GB of storage so there’s really almost no accessible storage for the user unless they get a microSD card slot.

Yeah, I’m putting this tablet on the "not worth my time" list.