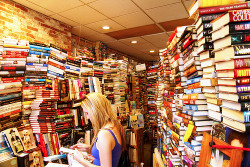 Yesterday’s news about Amazon burying the Hachette has sparked a lot of discussion about the future of the book industry, including a blue sky piece over at Bloomberg.

Mark Gimen thinks that social networks like Facebook are where you’re going to find the future bookstores. Working from the current state of the news industry, which is depending more and more on Facebook for traffic, he suggests that Facebook could be the next platform for selling books:

The natural evolution of this is that Facebook and any social platforms that succeed it are where books ultimately will be sold. All the barriers to that are quickly falling down. At the beginning of the e-book era, e-books were tied to a specific device, your Kindle. Now they are tied to a retailer, Amazon. It’s become more and more clear that neither of those is really necessary. Lots of companies now can easily create the infrastructure to store, sell and deliver books to your app.

Is that a business that will always demand that publishers pay 30 percent of their net to an Apple or an Amazon? Or can you imagine it as a service that publisher’s buy for a flat 50 cents a book as they publicize their books on Facebook and sell them directly? Doesn’t take much of a mental workout to imagine that.

I don’t think it’s terribly likely to come to pass, but I’m also not going to dismiss this out of hand. 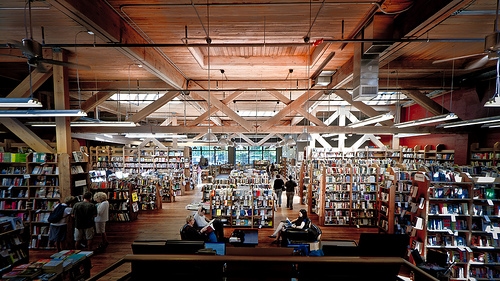 As I pointed out in July it is already possible to sell stuff on Facebook. There are companies that can help an author set up a store. It costs a lot more than 50 cents per copy, but the costs will go down if the idea of using FB as a sales platform bear fruit.

But even though it is possible to sell ebooks on FB, I don’t see that it becoming common – not unless a major retailer gets behind the idea (and why would they, when it’s someone else’s platform). There’s more to selling a book than just the financial transaction and it involves skills and activities that publishers don’t do very well, including discovery, customer service, promotion, and sales.

It takes a retailer to sell a lot of books, and once you’ve built up the infrastructure and business processes to support bookselling, you might as well launch a website where you can better control the buying experience.

It’s that whole "controlling your own platform" idea that is probably going to keep social networks from being able to replace Amazon as a channel for selling books (that, and DRM).

DRM will play a role, definitely, but the main issue, which is so easily pushed aside, is that social networks still aren’t great at direct sales. Not that this couldn’t change, so I won’t outright dismiss it either, but I would guess that the overwhelming majority of users despise being sold things on their social network pages.

Amazon is a retailer. People go there with the intent to search out things to buy. I would think very few people check Facebook or Twitter with the intent of purchasing something.

I could see Facebook and Twitter getting better at pushing more books, and selling a fair amount simply because of their reach, but unless they create a way to purchase and instantly read ebooks that can compete with the Amazon’s frictionless 1-click platform, they’ll never put any real dent in the marketplace.

Oh, I wish they would try it.
Soend a few hundred million marketing books on Facebook.
And twitter while they’re at it.

It would be a step up from requiring authors to "bring a platform", do book tours at their own expense, and basically do everything the publishers claim to do but don’t do for anybody but the top two or three sellers.

Amazon would welcome it too, btw. 🙂

To the extent that it happens it will mostly work in favor of deep-pockets publishers and would do much to narrow the indie market Amazon has done so much to foster, and further disadvantage the midlist book.

I have some relevant experience, because I’ve tried focused advertising on Facebook. I did get clicks, at about $0.10 to $0.15 per click, but not enough of them turned into sales to make it worthwhile. Based on this, I expect that Facebook is most likely to work for books with truly mass appeal because the author is already established as a bankable brand name.

What was that article a few days ago complaining about Facebook? Don’t they have enough problems already?

HA. Written by someone who methinks does not actually use facebook. You don’t visit facebook to BUY stuff, although there are ads and purchase decisions sometimes are made there. Too many inline ads and facebookers revolt.

Goodreads is a different story, but goodreads doesn’t sell books. I’m pretty sure Amazon bought them in order to forstall that possibility.

I don’t use it much, no. But since I know that it is possible to sell onFB, I can’t dismiss the idea out of hand.

I think we’ve seen that we can’t trust Facebook with even basic personal info, would you really open up your credit card to those clowns?

If that doesn’t work, Amazon’s contracts with authors/publishers, due to MFN, also prevent selling on Facebook.

No, not at all. All you need is an add that clicks through to the relevant Amazon sell page rather than a Facebook sell page.

I was referring to Facebook as the retailer not as a referral service.

BTW, browser addons would remove any Amazon ads from Facebook.

I don’t know if it would work or not, but I follow most of my authors on Facebook & that’s how I know when they have a new book out. They always provide helpful store links to where it can be purchased too. Shopping made easy.

I would consider buying from Facebook if there were no DRM, good price & an easy download option. I won’t hold my breath though.

Here’s another reason why Facebook won’t make a good sales platform: they keep changing what you can see in your feed.

They made yet another change today:
http://techcrunch.com/2014/11/14/facebook-likes-now-worth-less/

Fascinating. Mark Gimen: "All the barriers to that are quickly falling down." Sure, as long as companies are willing to spend millions upon millions to set up the infrastructure. And years and years refining the system. Who will spend all that money? Publishers? Hardly. Facebook? Doubtful. They’re going for a quick win. They don’t have a longterm retail strategy.

As someone else said: does he actually use Facebook? I don’t like the platform, I never have, so I may be biased against it, but using Facebook is a painful experience.

Heaven knows that finding the ebooks you actually want to read on Amazon can be a hassle at times. I can’t imagine the sheer horror of trying it on Facebook. Although Facebook started out fine (when compared to MySpace) it’s looking more and more like a bargain bazaar. I can see publishers selling a few bestsellers there, but Amazon is years ahead in infrastructure, so anyone trying to muscle in at this late stage will have to spend a lot of money.

[…] I reported on this story last week, I was less than certain that the idea was impossible. I concluded it was improbable, but I knew […]

[…] now Facebook has hit on the idea of becoming a marketplace portal to rival Amazon. I don't see that happening, but more importantly Facebook is coming to the game at just the right […]