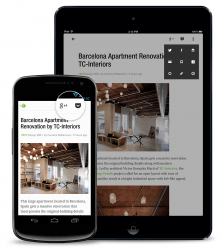 It’s been not quite 3 weeks since Google announced the end of Google Reader, and many are already crowning Feedly as the heir apparent.

This service has added over 3 million users in 19 days (500k in the first 48 hours), setting a new record with over 7 million users. In addition to releasing a new browser plug-in last week, today Feedly announced a major redesign of their mobile apps.

They’ve released new apps for Android and iOS that have slight changes to the prettified layout as well as what Feedly says is a faster and more intuitive vertical transition and better control over the list, magazine and mosaic views. I’m not sure I see the differences (not in the Android app, anyway) but that’s not all that Feedly is announcing today.

Feedly is also boasting that they’ve improved their discovery and recommendation engine. According to their blog, Feedly’s new search algorithm "is amazingly fast, and brings over 50 million feeds to your fingertips". It builds on and learns from the searches of all Feedly users so that the "more you use Feedly to search, categorize and follow your favorite feeds, the better our search and discovery will become". 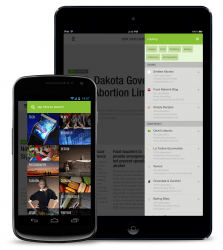 Speaking as a former user of Google Reader, my reaction to this news can be summed up as "whatever", but that doesn’t matter. This move isn’t intended to attract Google Reader users (more on this later).

I’m not so interested in discovery, but Feedly has added other features which interest even me. They’ve added a title-only view to the Feedly apps, thus enabling me to fit more content on to a single screen.

There is also an improved menu for sharing that adds Google+. Speaking of sharing, the Feedly apps have an option in the settings menu where you can enter your bitly, Twitter, Pocket, and other credentials.  I find that highly appealing because it saves me the effort of opening a new tab before sharing a post on Twitter.

And last but not least Feedly has added a new way to prioritize feeds. Readers can now mark an RSS feed as a "Must Read", and Feedly will use that make sure that the new posts from those feeds bubble up to the top of the feed selection panel and in the “Today” section.

All these updates are starting to give me the impression that Feedly is going after not just the hardcore news reader (me) but the casual reader as well.

Feedly wants to recruit readers currently using apps like Flipboard, Pulse, and Zite by giving them a magazine type reading experience while also trying to attract hardcore news junkies like me with a dense information-rich reading experience. Feedly is trying to pursue both ends of the reading spectrum (the hard-core news junkies and the entertainment readers). That’s an ambitious goal and I am looking forward to seeing if they succeed.

You can find the new apps in iTunes and Google Play.

Hi Nate. I love you blog!

I’m trying out Feedly now as a former Google Reader addict. My new favorite feature is the "gg" shortcut. that lets you go right to a particular feed or folder by typing "gg" then the first couple letters for a search. It’s like an application launcher inside of Feedly.

[…] you don't have to take my word for it; instead consider the millions of people that have fled to GR alternatives like Feedly, or the numerous services that have come out of the woodwork since Google Reader was […]